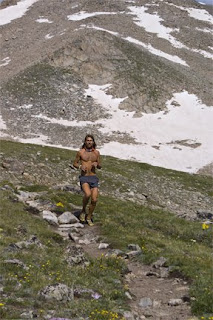 (On Massive--I just can't get enough of that mountain. Photo: Marco Peinado.)
.
Sometimes you just have it. "It" being that occassional, ineffable feeling while running that is defined by boundless energy, effortless flow, precise foot placement, lungs like bellows. This morning I had it. Although my legs only had a normal pep while jogging up the flat grade of Halfmoon Creek Road, the moment I stepped on to the Colorado Trail to traverse over to the ascending Mt. Massive Trail, I could tell that today things were different. The initial ascent out of the valley is surprisingly sharp, but instead of protesting, my legs seemed to welcome the vertical gain. Above treeline, the altitude barely registered. Rock step-ups were of no consequence, inflicted no sting in my legs. Every step was impossibly efficient.

Once, a Colorado Springs reporter called me in order to comment on this particular feeling, of the sensation of being so physically adroit at a given task that focus and consciousness seemingly cease to exist. Scratch that, seem to exist on a much higher plane, rather. At the time, I was living and going to school in Bozeman, MT. I was studying for a mid-term in the campus library, so I went outside to take the call. Except that I had to hang up because I needed to walk on crutches to leave the building. And my foot was in a boot because over a month earlier I had been experiencing one of those ineffable moments during a run when I stepped on a rock and something gave way in that foot and it would be months before it was right again and I would feel that way again. And there was frozen slush on the ground. And night was descending so it was bitterly cold out because it was Montana in the winter. And yet, the feeling he wanted me to describe is so non-subtle, so singular, that I had no problem conjuring the notion of the concept, despite being so far removed from experiencing it. Distance from the flow of running does not lessen the emotional impact it has on me; I never forget.

I remember an October evening in Tyndall, South Dakota. In 1998, a bridge was built across the enormously formidable Missouri River, approximately two miles east of my home town of Niobrara, Nebraska. At this point in the Missouri, the river is over a mile wide. Think, for a moment, about a river that size. And then, try to imagine the reasoning for spanning a waterway of such breadth with a man-made structure. What was on the northern bank, opposite of the ~400 person hamlet of Niobrara, that was so important to reach? Some fantastic, 100 foot high, cream-colored chalkstone bluffs (type location for the Niobrara shale formation locally found in the Garden of the Gods). A cattle pasture. Some red cedars. That's about it. But, I digress. 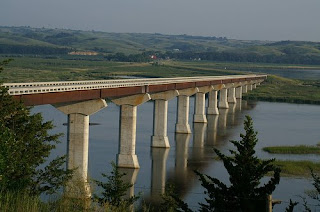 (Chief Standing Bear Bridge, seen from atop the shale bluffs on the SD side, looking towards Nebraska. My home is way back in the hills in the upper left corner.)

(A quick aside: as I sit here leaning against the outdoor wall of the Lake County Public Library, plugged into the only outdoor outlet on the building, two volunteers are on their knees on the library's meager lawn, picking up, by hand, cottonwood tree cotton. This is what draws me to small communities like Leadville and my home town of Niobrara--the sense of ownership, and pride in simple values, that still reign among the citizenry.)

But, the bridge was built, and the main bearing this had on my life was that during cross-country season, once a week or so, after school was out in the afternoon, my father and I would make the thirty minute drive to Tyndall, SD to run on their all-weather, outdoor track. There is nothing like charging around a track, in spikes, on an autumnal evening. After the sun drops below the western horizon, a brisk chill nips the air providing perfect temperatures for distance running. Eventually, the twilight dims, and the ever-blowing plains wind finally takes a rest. If one is fit and running well, it is magical.

On this particular evening, I was doing a session of 3x1mile with a full mile's jog between each one, the idea being to allow one to really get cranking, stretch the legs, blow the tubes out, test the limits. With my Dad standing track-side yelling splits I breezed through the night, breaking 5:10 for each one at a time when my mile PR was barely sub-5 (regularly under-performing during races would be an unfortunate trend that I would carry with me into college).

During that workout, I had it. The glorious ability to make everything hurt like all get out---in a good way. Not, in a like, oh my god, the well is dry, in fact, not only is the well dry but I'm scraping frantically at the dusty basement of the well, yearning for the tiniest seep, desperate for moisture, ravenous for one final drip kind of way that I associate with iron deficiency, mononucleosis, or extreme overtraining. Instead, this is the kind of strain that isn't strain. It's pleasure, and limitless, and rife with effort, but the fruits are so much more than you imagined. You feel as if you can run forever. 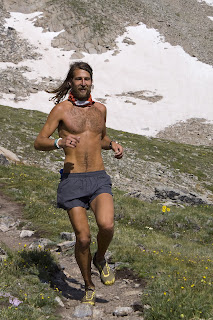 And that is how running on Mt. Massive was this morning. Rife with effort, but infinitely sustainable. These are the days for why I do this. These are the days that make me know I am a runner. Everything is so easy, so right, so in its place, that nothing else but pouring down (or up) a trail would make sense. 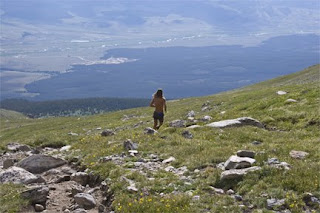 (A view of the Arkansas River valley between the Mosquitos and the Sawatch. Photo: Marco Peinado.)

Yes! That feeling is what my wife has dubbed a "magical run". It's great to hear it described so well, though not as concise as my dear wife's characterization.

I'm curious; since you've obviously worked through your core muscle cramping issues, did you do anything other than keep up with your runs? Any core training?

That blog was so inspirational it made me remember the feeling you describe something i haven't felt for over 15 years. I have been dabbling this past month or two but now i know i must get back to being the distance runner i was and this is thanks to you. The only problem is how do i begin the long road back ?. Do i walk ?. Do i run ?. Both ?. Do i have a set time or distance to cover in training ?. This is so great how you have made me feel but where do i begin ?. Your advice would be much appreciated.

Yahtzee! You did it again! Anybody who has ran long enough has experienced "that" feeling; not only is the accompanying "runner's high" good, but when the entire run is like you so eloquently described, THAT IS WHY WE DO THIS!

Sweet pics of The Good Life; it's 75, sunny, no humidity here, AND IT'S JULY, NOT SEPT! Headin out to see if the legs feel like blessing me today, can't waste this weather.

Another well written post, and infinitely better than the many out there stating the daily mileage, etc (like mine).

Do not use all of these Private Money Lender here.They are located in Nigeria, Ghana Turkey, France and Israel.My name is Mrs.Ramirez Cecilia, I am from Philippines. Have you been looking for a loan?Do you need an urgent personal or business loan?contact Fast Legitimate Loan Approval he help me with a loan of $78.000 some days ago after been scammed of $19,000 from a woman claiming to be a loan lender from Nigeria but i thank God today that i got my loan worth $78.000.Feel free to contact the company for a genuine financial Email:(urgentloan22@gmail.com)

Your posts have sparkling sentences which are the basic ingredient of good writing. It is a skill of the writer to grab the reader’s attention towards the article and make to read complete article interestingly. I was simply searching for some information about my work then I saw your post and I found it interesting. I read the whole post with the same interest. You have done a good work. Maintain good quality in all the posts. Give a visit to quality custom essays online. It also provides help for students in their academic work.

These days it is relatively easy to take an English class. Whether you take this class online, on Skype or in the classroom or at https://essaysprofessors.com/ , there are many options out there.But here is a new idea for you: Have you ever considered trying to take a class about a specific subject in English?

It's always nice to hear for me that there are people who found themselves and what they want to be, whatever it's about reading, music or pets loving. Still, according to the gender inequality research paper topics there is a tendency between man and women in happiness, it means that mostly women tend to be unhappy, I guess because they don't really do what they would like to.

Hi there!
What an awesome post with lots of useful information. What I can say about running is that is very useful for our body and mood. Also, sometimes a person just needs to be alone with the thoughts. Also, I have big problems with the writing how to write a lab report and I decided to make a pause and start running for relaxing.