I made it up to Barr Camp again this morning. I'm currently living a 10 minute or so bike ride from Memorial Park (where the Pikes Peak Marathon and Ascent starts), so I might spend more time on the Manitou trails than I have in the past. Down in the streets of Manitou the wind was enough to knock you over, but once I climbed up into Ruxton Canyon, the world went gloriously calm and balmy.

As I ran past the Cog, I said hello to Freddie or Eddie Baxter (they're twins) who was no doubt just finishing up his daily circuit of the Incline. Speaking of which, hiking the Incline may very soon become legal, as a result of a little quid pro quo betwixt the Colorado Springs Utilities and the Cog Railway. Read about it here. 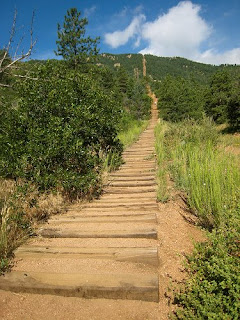 I've never done the Incline as part of my training (maybe if I ever do Hardrock, I'll start), but I do recognize it as an incredible means of inspiring more people (all kinds of people, not just hard-core types; just check out the crowd on there some weekends) to get outside and use their bodies. I think it's that kind of activity that can hopefully help someone gain an appreciation for the land and the mountains that maybe they didn't have before.

Anyways, the conditions on the trail this morning were already vastly improved from Sunday morning. It was mostly dry on the Ws with only a few patches of dirty ice, and from there to No Name the trail was virtually completely dry. Of course, above No Name, things went south quickly with the "trail" becoming a rock-hard cowpath of ridiculously uneven frozen slush and snow. Screw shoes would've been prudent. Despite this, the jaunt to Barr was idyllic with the peak itself enshrouded in a cloud of swirling snow whipped up by the hurricane-force winds up there.

The run down was a nail-biting affair above No Name Creek with all of the ice, but below there the sunshine and my much improved purchase on the trail allowed my mind to wander to the lyrics of a Yeasayer song all the way back down to Manitou.

In what may become a regular method of spicing up this blog a little, below is an incredible spontaneous version of the song(s) in my head this morning out on the trail (feel free to skip ahead to the 1:30ish mark):


"Yeah, yeah, we can all grab at the chance to be handsome farmers!!" That's often exactly the sentiment I feel when I'm running in the mountains.
at 2:46 PM 3 comments: 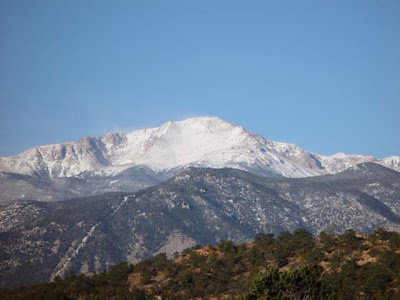 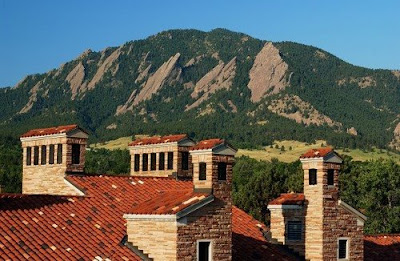 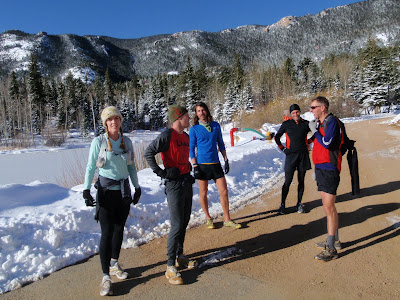 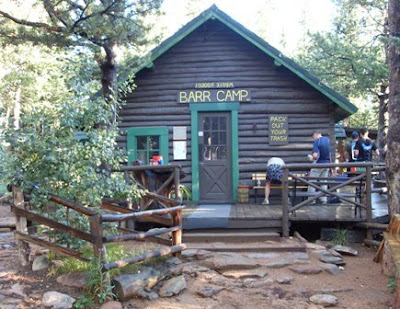 There was a little more snow up there today than this picture shows!
at 12:53 PM 12 comments: