I ran up Ostrich Peak this morning, for the second time this week. Ostrich is a perfect example of the fantastic trail/mountain running opportunities that Ashland provides. I live literally 1 1/2 blocks from Ashland's downtown Plaza (yes, Ashland has a plaza; after spending time in the Southwest, I love it when a town has a pedestrian-ish area at its center a la Santa Fe), and the uphill begins less than 100 yards from my front doorstep. After 5 minutes of running, the route takes a right turn onto Strawberry Lane and this is where life gets strenuous. Strawberry climbs at a 20+% grade for a good quarter mile or so, and there's really not another stretch of truly flat trail until the summit of Ostrich at 4700', five miles and nearly 3000 vertical feet later.

The run up this morning was classic Ashland. In the pre-dawn darkness, town was enveloped in a cloud of thick fog, but within 300 vertical feet I was out of the fog and the temperature rose significantly, to 50+ degrees F. The route up Ostrich involves Hitt Road (really a single track trail) and then a turn onto the even steeper Mystical Trail. Here's shot of some typical tread up there (Photo Credit: drjeff). 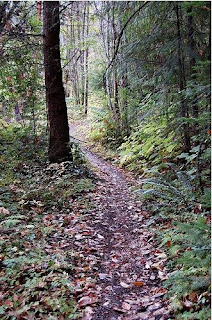 The top of Ostrich--as with any climb--is the real treat. Now, in the middle of January, there were just a couple small patches of snow, and the view to the east is phenomenal. One can see past Grizzly Peak (6000', on the other side of Bear Creek) to the stunning conical profile of the snow-covered 9500' Mt. McLoughlin (it's much more imposing in real life than it appears in this photo). Additionally, some of the snow-covered pointy Cascades near the Crater Lake area are visible. (Photo Credit: drjeff) 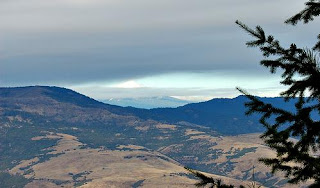 Having a run like this right out my front doorstep (one of many possibilities, but the most imposing peak as seen from Main Street) makes me think of Scott Elliott and his "every day, lots of vertical" approach. I'm not going to be going for 100 summits in 100 days any time soon, but I do plan on getting up there 3-5 days every week.

Prompted by an internet blogging "tag" to divulge my 2009 racing plans, I return to posting. Although I haven't done any recent racing, I did finish out the year with a couple of crewing roles for friends at races in the Bay Area. These events gave me a newfound appreciation that I hope to carry forward when people are crewing for me in the future. Furthermore, both Erik's and Kyle's performances were inspiring for the kind of racing I hope to be doing in the coming year.

I'm heading into 2009 with a thought to learning some lessons from my (lack of a real) 2008 racing season. Basically, I hope to focus on a few key races where I have a good, long, gradual build-up in training for each one instead of constantly always cramming trying to get in shape. Hopefully, with a few less miles and some smarter decisions on my part, I will be more consistently healthy. In 2008 I ran 5162 miles, which was only about a dozen miles less than the year before, but I was, yet again, almost completely out of running for four of the 12 months of the year. That has to change.

Because of the possibilities of injuries and other life circumstances, I've only 100% committed financially and mentally to one race so far this year: the Western States 100. Barring any natural disasters (and injury) that should be one heckuva fun day of racing. Plenty of prognostication has already occurred elsewhere on the Internets regarding that event, so I won't go much further than to say I will be completely focused on running as well as possible there this year.

Other semi-focus races I am considering are either the Leona Divide 50 or the Zane Grey 50 in April. The main determining factor there will be whether I will have moved back to Colorado by April or not. Running and working in Ashland is pretty hard to beat, especially this time of year when most of Colorado is suffering through snow and cold temperatures. Right now there is more than 3000' of snow-free, singletrack vertical out my front door (woodchip paths within about 2 minutes of jogging) and the daily highs are typically in the 40s or even 50s. However, I love Colorado and once the weather mellows out a bit there, I know I'll be itching to get back to the higher altitudes.

I would also love to return to the Leadville 100 again this year. I still feel that faster times are still waiting to be had there, and hopefully a return to Colorado for graduate school in the fall will make Leadville a logical race choice (assuming post-WS recovery goes well).

Other than that, I'm really just going to play it by ear. In the meantime, I'm going to keep enjoying all that southern Oregon has to offer.
at 6:07 PM 61 comments: