I started running 14 years ago. I was mostly just an 11 year old kid who wanted to do well at the Presidential Physical Fitness Test's 1 mile run because I had been the fastest kid in my class the previous year when I clocked a smoking 6:29 (my 6th grade class had 12 students or so; Niobrara Public Elementary School is not large). So, some time in February of 1995 I started running 1 mile per day to prepare for the P.E. class test some time in March. I ended up running 6:08. By my 12th birthday later that summer, I'd lowered that to a 5:32. 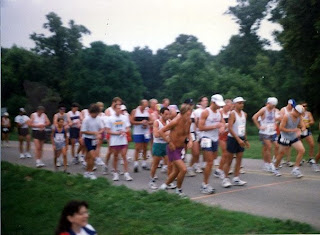 (Start of the Lake Okoboji Marathon near Spirit Lake, IA; July 19, 1996. I'm the tiny person in the blue singlet near the back.) 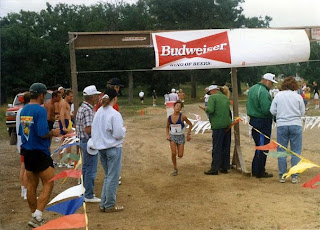 Because I had already consumed enough 70s-era running literature gleaned from the local Goodwills and second-hand bookstores, I began keeping a training log on April 12, 1995. It was in a spiral-bound, college-ruled notebook, the cover on which I soon glued a photocopied picture (see below) of Roger Bannister at the anguished moment of him breaking the finishing string of history's first sub-4minute mile. 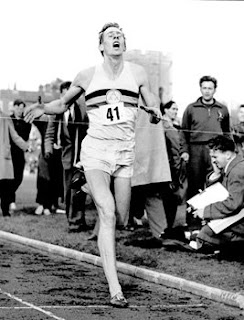 Anyways, the point of this post is that this past weekend marked 14 years of recorded running for me. So, after going back through all my logs, I came up with a lifetime total of 47340 miles for those first 14 years. Divide that number by 5113 days and the result is a mathematical average of 9.26 miles per day. For 14 years. I'll take it.

As an aside, it just occurred to me that I am now roughly 2662 miles away from 50,000 lifetime miles, which seems like a nice round number. If I average 166 miles per week for the next 15 weeks or so, I should eclipse that milestone directly on my 26th birthday on August 2nd. We'll see.

Great post! I love the photo from your first marathon. Good stuff.

Dude, 3:50 for a 12y.o.'s first marathon? That's incredible.
I started running in 1978, but stopped a couple years later. I ran rarely since until about four years ago. So even though I'm 49, you've been running way more years than me.
Very awesome that you found something you love doing at such a young age.

Tony, Thanks for posting this. It's nice to see that what you have now didn't come from nowhere.

Anton,
Thanks for this post and for the average of posting these last weeks. It's _so_ good to read.

"it just occurred to me that I am now roughly 2662 miles away from 50,000 lifetime miles"
You should enter the M. Mahoney's Million Mile Ultra Run (http://ice.he.net/~mmahoney/ultra/million.htm). Top5 at 50,000 is still available :o)
Unfortunately, it's running from 1997 and maybe you need a routine code for entering last 147 months records!
Cheers

Yours is definitely the most interesting and fun to read ultra running blog- that I know of- and this post proves it. And your writing is unique and honest. Well done.

Nice post, Tony. It reminds me of the movie, Saint Ralph (highly recommended), though he began running for slightly different reasons. Great to have you actively writing (publicly) again.

I hope you reach your goal.

Hope you have some good runs this week - looks like the weather has plans to inhibit that.

As a fan of yours I have to say how suprising, yet really cool it is that you would share a glimps of your early days with us that read this blog. Pretty awsome.

When you crossed the finish line of that marathon at 12 years old, did you see yourself running the ultras that you run today? I suppose at that age you would have at least been aware ultras were out there, but even as a 12 year old, were you planning on tackling an ultra in the near future after that first marathon?

I love the picture from the start of that first marathon. Reading into it a little, does that mean you'll give all us old guys a head start like you did to all those guys in 1995?

Thanks for sharing that. Great stuff.

Still wish I'd been there to see that one. And the pictures! Seriously, it hasn't seemed like you've been running that long...but the numbers don't lie. I'm proud of you.

Thanks so much for sharing your early running history. 50,000 will be an amazing accomplishment, hopefully with much more to come.

I am working on a blog series on minimalist footwear. I am looking for a few people who would be willing to review my work and comment, kind of like a peer review. Is this something that you might be interested in doing?

If so, is there a way that I can contact you other than through comments?

This is sooo cool, to know more about the "little Anton", thanks for sharing. 14 years and 50k already, gee, you are up to 300k or more life time miles! I feel I started running seriously so late, but maybe my joints will appreciate. I know, your joints don't care, you are running so light, riding the wind... ;-)

Did anybody notice how he only has to average 166 mile weeks for the next 15 weeks, I love it -not a flinch.

50,000 mile something most people would hope to have in their LIFE.

I met you in person at a coffee shop in Leadville in August. You gave me some good advice regarding giving my 15 yr old daughter an iPod. You said, "Don't." Behind that advice is some a good worldview.

I would be curious to know your thoughts on God and running.

This blog entry is totally wicked and very inspirational.
My money is on you at WS100.

Tony - awesome to see that you continue to rack up the miles! I remember you from your visits to the Luther College running camp. We have a forum for past and current LC running alums and it's pretty cool to see how many guys remember you.

Keep up the miles and we'll see you on the trail!

Dale Garland (HR100 R.D.) is trying to find Kyle S. If you can get in touch with him, you might want to ask him to shoot Dale an email.
if nothing else, Dale can be reached via HR100 at Yahoo groups dot com.

Hope your training is going well.