The public radio station (91.7FM, out of...Golden? Maybe?) is broadcasting the fantastic music program, World Cafe. Wisconisin band Bon Iver's excellent track Skinny Love strums through the speakers. I sit and read about the revolution occurring in Iran. I try to imagine what it would be like to live in a society where the government gets away with killing protesters. Relatively, running to the top of a mountain doesn't seem so important.

And yet, that is what I do the next morning. Mt. Elbert beckons. The highest point in the state at 14,440', and only 65 feet below California's Mt. Whitney, the highest point in the contiguous U.S. As a geologist, I wish I had a more coherent--or any, actually--explanation for why so many mountains fall within in the seemingly arbitrary 14000-14,500' range. Something to do with weathering and age of orogeny I'm sure.

As a result of this distinction, the Elbert trails are well-traveled, even mid-week. I pass my first hikers well before treeline, but they certainly aren't the last. I fight the desire to feel so possessive of the mountain, as if I should have it all to myself. There is nothing special about me or my chosen activity for this trail, and yet, this default selfishness is hard to fight past in my mind. I harbor a low-level dread for the customary, trivial interactions that I am forced to engage in upon meeting/passing each hiker.

Part of this, I suppose, has to do with the relationship I have with running in the mountains. I am not likely to be mistaken for a religous person, but upon reflection--while awash in a post-run glow, maybe lying beside a rushing mountain stream--running up a mountain takes on a meaning of almost sacred dimensions. The mountains are where I worship, where I honor and experience whatever greater oneness or connectedness there is in the world. As a result, disruptions can be...just that. Plus, there ain't a lot of extra air to waste with talking.

Above tree-line, the switchbacks seem to take on a predictable rhthym: I turn to my right and am greeted with steepness, a slight overdraft on my account of available energy and general muscular responsiveness; I turn to my left and the trail is discernibly flatter, my stride subtly lengthens and I am allowed a slight recovery.

At about 12,700', the trail flattens considerably in preparation for skirting a formerly glacial cirque, the headwaters of Box Creek. From my current vantage point, the top of this cirque erroneously appears to be the top of the mountain--the first of many false summits on this peak. The flat section reminds me of a stretch of the South Kaibab Trail on the Skeleton Ridge of the Grand Canyon in that it offers a brief respite at approximately the half-way point of a consummately arduous ascent, and then proceeds to climb even more steeply. Mt. Elbert is conspicuously without oppressive heat, ankle-deep red dust, and mules, however. 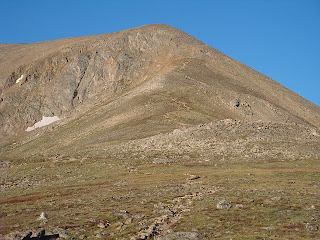 (Flat trail leading to the steep climb past the cirque, to a false summit.)

The summit cone of Elbert is still mostly covered in snow, but previous footprints afford a convenient if inconsistent staircase of sorts to the top. After much effort and multiple wellings of false hope, I am finally there: the highest point in Colorado, the apex of the morning's run, the cessation of significant effort. But, someone forgot to tell me about the party. The top of the mountain is veritably crawling with people. Nearly a dozen or so folks from Wichita alone. A portly fellow sporting an enormous backpack, full ear-coverage noise-canceling headphones, and a t-shirt with a "Polska" insignia. Can I take his picture? Sure, why not.
Again with the selfishness. Am I really that bad of a person? I guess so. It doesn't help that I--wearing only shoes, shorts, and a watch, with a 3 oz. jacket stashed in my waistband--am so obviously different from every other person up there. But so it goes. The morning is stunning in its beauty. The sky is indescribably blue. Royal blue. Like the blue you would paint a house. There is not a hint of haze. And eventually the crowd leaves, disperses, descends.
And eventually I do to, after a few moments alone. On the descent it occurs to me that running up a mountain could be seen, in its own way, as an act of protest. A temporary flinging aside of all the things that constantly clamor for our attention. An outrageous confirmation of agency in a world where we can often feel a little lost in the shuffle. At its core, for me it is the most authentic expression of personal freedom I can conceive. And, if nothing else, it is selfish. But, for now, I am okay with that.
at 6:12 PM

I started a comment that was much longer than this ... but now it is just this: I am digging your recent posts. Very musical. Hope the spirit continues to move you to post this way. Keep at it, give away what you want to receive.

Thanks for the mental images you are presenting about Leadville and the surrounding areas. I am going out there on the 4th of July and hopefully acclimating a week before the Marathon. I can't wait to see it in person. Great writing!

"I harbor a low-level dread for the customary, trivial interactions that I am forced to engage in upon meeting/passing each hiker."

That reminds me of the movie Seven where the Kevin Spacey character had written in one of his journals that he was riding the subway one time and someone was forcing him into meaningless boring conversations and he got so sick of it that he just threw up all over them, lol.

I too am enjoying your recent posts... I feel what you're saying. Often times, when you come around a corner on a trail and you've been alone for so long and then... whoa! Hello -- another human -- do I say hi, do I nod, do I give thumbs up? I enjoy the solitude but the occasional contact is nice as well... as long as congestion on a trail doesn't get in the way of a run to the top of a mountain!

"I am not likely to be mistaken for a religous person"

Selfish? Just hope you are not developing a God Syndrome.

Keep up the great posts.

I just enjoy your posts! Loved "Mt. Massive" one, but enjoy them all...

I understand your "dread for the interactions": when I run in the hills in the morning with sun rising at some point... I feel that I "own" the hills, streams, etc... I just do not recognize the area when there are some people there.

It's ok to be selfish. You're human. Keep it real.

I second the above comment. Its not a bad thing to be selfish. I'm going to go finish The Fountainhead by Ayn Rand now.

enjoy the music in the post.. as much as the story telling view.. I too have the same problem when running on single track or trails. Folks seem to want to talk.. and have you in their world.. when in fact I have no such desire.. it makes me feel strange.. so i try to be kind.. but would rather they just let me keep running..

Ultra runners are pretty much as selfish as selfish can be when we are out running. But if it helps us to be more giving and considerate in the "real world" (take that as will), then it's not a selfish act. I know it helps me walk closer to the Lord and to be a better husband and father. Besides 4-5 hours of running gives us more opportunity to sort through our thoughts than the average person.

u DNS @ western states, what happd?

Hope all is well with you.

We were all surprised that you did not run in the WS100. After your epic win at the AR50 I thought you had the best chance of winning the event. Of course, after reading this post I get the feeling that winning the WS100 isn't too high on your list of things to do right now.

You're approach to life and how to live it never disappoints.

We missed you in Squaw, Tony! Hope you are healing quickly, while keeping riding the wind. What spectacular views and posts you send us from wonderful Colorado, thank you!