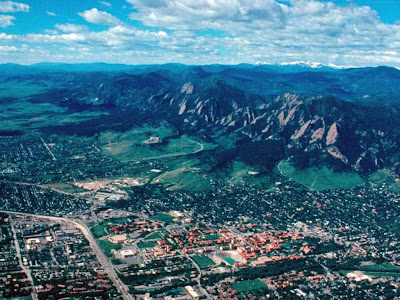 (Boulder's mountain backdrop...missing Flagstaff and Sanitas to the north, however.)
Driving into Boulder from the East, five peaks (well, more than that, but all of these have connected trails) provide the meat of the backdrop of town: 8549' South Boulder Peak, 8461' Bear Peak, 8144' Green Mountain, 7000' Flagstaff Mountain, and 6863' Mount Sanitas. Seeing as they are connected, it presents a tantalizing and obvious traverse. This weekend I completed the first of what I expect will become a nearly weekly outing (hmmm...we'll see once things get truly snowy and icy).
I jogged the less than 20 minutes from my house up to the start of the Mesa trail at Chautauqua Park and could tell that the previous day's flat and easy 90 minute run had did my legs good. The Mesa is nice. It is such a classic Boulder trail with its accessibility, views of the Flatirons, and ubiquitous hikers of all stripes, often with dogs in tow. I was happy for my short-sleeved shirt as the trail bops in and out of drainages mostly in the trees, but could tell that it was going to warm up to be a glorious autumn day.
The Mesa Trail is only "flat" in comparison to the craggy peaks whose bases it winds along. The highest point is ~6600' (compared to the 5300' that my house sits at) and there are several 100-200' rollers to put some sting in the legs. I cut down Big Bluestem to make the nearly 1000' descent to the South Mesa Trailhead on Highway 170 and started the traverse from there having already run 1:17.
Leaving South Mesa TH and climbing up the Towhee trail, it is easy to think that one is running "uphill". That all changes when Shadow Canyon is reached. In anticipation of the effort, I took off my shirt at the mouth of the canyon and headed up. This trail is yet another wench of a rugged climb that Boulder has to offer. Apparently these mountains don't really know any other.
This stretch of trail is only allegedly 1.1 or 1.2 miles long and I did it in 22:50, not killing it, not feeling great, but definitely not slacking either. It gains 1700' in that 1.2 miles which is absurd now that I think about it. The Incline in Manitou climbs 2000' in a single mile, so for anyone who's been on that, that gives you an idea of how crazy Shadow is. But, after seeing it for the first time today, it's definitely possible to nail this thing on a day when I'm feeling good and I have dialed in some of the rock step-up footwork sequences. Come to think of it, I would bet that, time-wise, this and the Incline are pretty comparable. I mean, sub-20 on this stretch would be nails (as it is on the Incline). 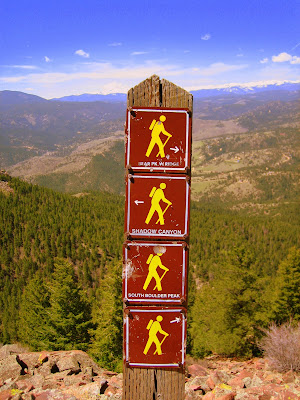 (The saddle between South Boulder and Bear Peaks.)
Anyways, I got to the saddle and was righteously greeted with a horizon-wide view of the snowy Continental Divide. But, from there I had another ~300' and 5min of vertical to the top of South Boulder Peak. The final forty seconds or so of this is a scramble on boulders, so that's kind of annoying, but I do really like the views from over there, looking down into Eldorado Canyon. The run down and over and up to Bear Peak was actually quite nice. I'm getting better at this stuff. After running up Shadow I was thinking, "Damn, I just want some real trails with actual switchbacks and some actual tread instead of these glorified rock staircases." 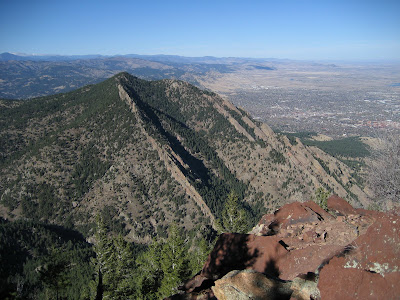 (Looking north to Green Mountain, from the summit of Bear Peak.)
But, on the way over to Bear, I decided that it's actually 100% fine. This seems to be true mountain running; I think it's good to have the opportunity to get as proficient as possible on really technical up- and down-hills where you have to mix a running cadence with occasional huge step-ups and then get right back into the cadence and then learn how to rock-hop on the way down. It's actually a huge blast when the trails/rocks aren't covered in ice and snow (they weren't today). And, since I'm gonna be in Boulder for a while, I think it's worth it to adapt to the terrain and get really good at it. Plus, I appreciate the more natural and wild aesthetic of running a rough trail to the top of a mountain and then having to scramble over boulders the last minute or two to gain the true summit. It is how it should be, really. 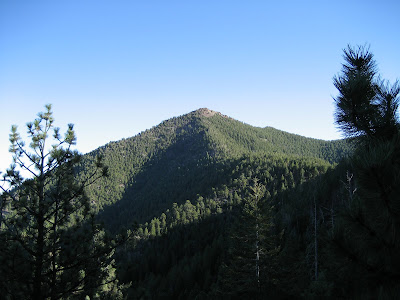 (View of Bear Peak while descending on the West Ridge trail.)
Anyways, I hit a gel on top of Bear and actually felt pretty solid on the descent down to Bear Creek. The top of Green was a bit of a dissappointment with a bunch of people clogging up the summit rock so I didn't even feel like elbowing my way up there to get a good look at the Divide.  Not that I hadn't already had at least two world-class, people-free views of the high mountains so far.  Going down Ranger and then over and down Flagstaff I just tried to keep the legs feeling good and actually pounded some pretty good descents.  Earlier in the morning I had contemplated forgetting about Sanitas mostly because it's on the other side of the Creek Path (my route home) and also because it's just such a heinous grunt.  However, I got to thinking about climbs late in various races and decided that a 1300' ascent in 1.2 miles was exactly what I needed to finish off the day's endeavor. 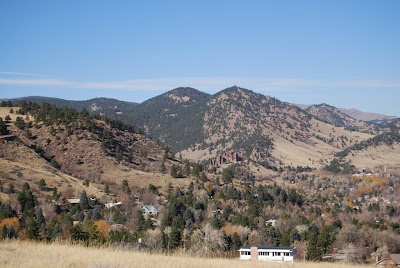 (Sanitas: it looks so benign, but not with more than 5000' of vertical already in the legs.)
So, at Eben G. Fine Park I chugged a much-needed bottle of water and refilled, ate a gel, shuffled over Red Rocks and then got to work on Sanitas. It's a good little mountain, that's for sure.  Tons of log and rock steps but also a few actual flattish sections, too.  Problem is, because of the beautiful day, it was crawling with folks and I was mostly a salty, slobbering mess at this point, so I felt a little self-conscious about the effort it was taking to just keep moving. Three days before Leadville I had jogged over to Sanitas and ran easily to the summit right at 19min flat, so I was really hoping to groan my way under 20min today on my untapered, not-as-fit, tired legs.  I didn't quite make it, but hit the top 2h38min after leaving the South Mesa Trailhead.  At the top there was the usual mess of humanity with visors and dogs and sunglasses and cell phones, so I mostly just caught my breath and jogged down the mountain, which was actually a lot more fun than I remember it being that Wednesday before Leadville.
On the way back down to the trailhead I elected to take the Dakota Ridge singletrack instead of the Valley trail and right at the bottom Jeff Valliere caught up to say hello but was just out for a short hike with his wife so he soon turned back. Which was fine with me, because I was pretty worked and was super-psyched to get back to the top of Red Rocks because it was all (slightly) downhill from there back to the house.  It was a good ache, though, one that I haven't gotten to experience in a couple of months.  It's always good to get to the end of a long hard effort like that and still feel pretty solid. I took a soak in Boulder Creek afterwards, but the water was so cold that I could only stand it for two minutes because my toes had gone numb and the rest of my legs were hurting so much from the cold I was gettting sick to my stomach.  I think I've gotten a bit soft since this summer, but hopefully I knocked a little inflammation down.  All in all, a unique day in the mountains.
at 7:59 PM

It is not hard to find Jeff out there. I think he actually has his mail delivered up at the Sanitas pole.

Fuller - if you are on the net, I expect to see a race write up from today damn it.

Anton ... another layer to the "pleasure" of the skyline traverse is to throw in Anemone (between Flag and Sanitas). It hurts.

Yeah, I definitely felt a little weird excluding Anemone (it's a decent little bump as viewed from downtown), but didn't see it on anyone else's run reports, so it was easy to skip...

Nice pics! But who the hell is taking the them? Tell me you carry a camera....

Yeah, it is not typically included. The trail out on it is pretty weak, crumbly. But things are sort of nice once you get up there.

Nice one Tony, I really have my work cut out to come anywhere CLOSE to that kind of time!

Good to bump into you out there, wish I could have joined you for a few miles at least, maybe next time.

I saw where you had your bottle and shirt stashed, I don't even want to think about where you were hiding a camera....

Nice run Anton! I grew up in Boulder and love running in the mountains when I get back there. For a while I've been imagining doing S Boulder/Bear/Green/Flagstaff. Never thought to put Sanitas in there and never knew this route had a name. Pretty impressive. Maybe I'll see ya on the trails someday. Enjoy the running there!

Hey,
I have a question completely unrelated to your post. I have read a lot about minimalist shoes/barefoot running and I'm all about it (and as I've gathered you are too). I am back and forth a lot between a big city where I go to school and run around in Vibrams and a small town with nice trails right behind my house which I usually have to wear shoes for to avoid bruising my feet. Can you help me to better understand how you 'modify' your shoes? I hate having a lot on my feet (especially when the heel is raised) and would be interested in attempting what you do. Do you maybe have pictures or do you show how you do it in that movie you're in?
ok that was a lot
thanks,
Nick

Sweet run, thanks for sharing!
I'm motivated to come down from the Fort to try it out sometime.
Anton or anybody have a total stats estimate (mileage/elevation) for this run as a loop like this? Other references I've found mention a shuttle, which is distasteful...thanks!

Love these peaks and did a similar traverse in prep for Leadville in '07 (MUCH more slowly, I might add). Called it the "Front Range Five". Nice job! If you are "getting soft" I can't imagine what you'd call the rest of us. Squishy?

Anton,
Good to see the fresh activity in your blog and on the trails.
My Rockies running is limited to a single go at Pikes Peak in '83 and the Silverton Alpine Marathon in 2006.
Just wanted to say thanks for the vivid, real time, run descriptions you provide in Riding the Wind.
Grey Badger, DR

Very useful post. This is my first time i visit here. I found so many interesting stuff in your blog especially its discussion. Really its great article. Keep it up.
Low Intensity Aircraft Warning Lights