Well, to get the most cliche part of this post out of the way as quickly as possible, it is a new year and that is exciting.

Since this is (primarily) a running blog, I will probably (primarily) continue to discuss my life in that context, here, for whatever that is worth. Ever since the Leadville 100 in August, my running has mostly been...frustrating. There were several races I wished to compete in last fall (Vermont 50, Lithia Loop Marathon, Masochist, North Face 50, even Bandera last weekend), but that was/has all been precluded by a cranky little knee. It is the same injury that first surfaced last April and kept me out of Western States this past June, and it is persistent.

It's not that I haven't been able to run. Quite the contrary. In all of 2009 I actually missed "only" 51 days (I employ the scare quotes because that still averages to nearly a day off every week) of running (compared to 118 in 2008), but curiously logged ~900 fewer miles in 2009 than in 2008 (~4300 vs ~5200). This is a function of my trick retinaculum/patella being pretty much happy with runs up to 2hrs in length, but nothing much longer than that. This fact makes the training and completion of an ultramarathon an especially sticky proposition. Any venture into the 4-5hr range of running duration has consistently led to a forced week or so of rest, waiting for the knee to quiet back down.

So, with that knowledge, and the commencement of the new year, I resolved to limit myself to 2hr length (albeit, frequent) outings, and, combined with some new proactive measures (acupuncture, sacroilliac joint adjustments, abductor-strengthening exercises), I hope to only extremely gradually increase the duration of my runs from the seemingly magical 120 minute threshold. So far, it has been working. The first 18 days of 2010 have seen me log 18 pain-free 2hr runs, each of which has included the 2500'-in-less-than-three-miles climb to the 8162' summit of Green Mountain here in Boulder. 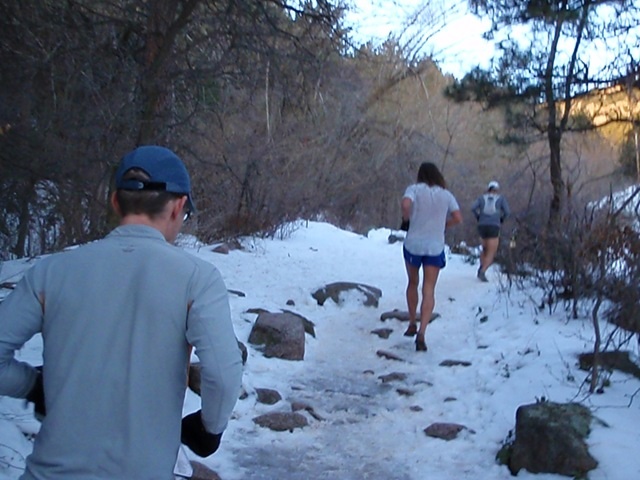 (A rare non-solo outing for me: Heading up Green Mt via Gregory Canyon this morning with Brandon and Chris. Photo: George Zack)
Much to my joy, these daily sojourns have been greatly ameliorated by the Mountain Gods (and Microspikes). For the past ten days, Boulder (and, the rest of the Front Range, I imagine) has been regaled with consistently excellent weather--highs in the 50s, plenty of sunshine, no precipitation. This is the kind of stuff that makes me love the Front Range climate so much.

(It is hard for me to not contrast that with the frigidity that I experienced back in Nebraska over Christmas, and that my parents continue to endure. A little over a week ago, my Dad reported lows of -25F and -30F on successive days (with a high in between of -5F) compounded by one of the top three biggest blizzards in northeast Nebraska history. Fun stuff.) 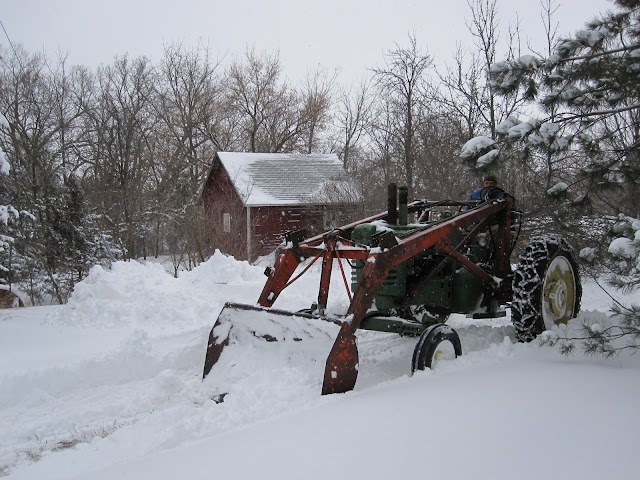 (My dad excavating a small slice of my family's treasured chunk of isolated rural Nebraska paradise.) 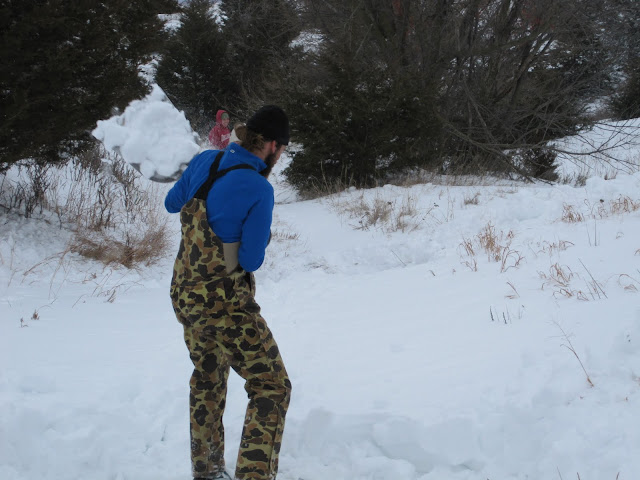 (My sister and I attempting to subdue one of dozens of otherwise tractor-swallowing drifts. Never underestimate the power of the ever-present Nebraska wind.)
So, in what state of flux does this leave any future (probably maligned and misguided) attempts at ultramarathon racing? Hard to say. I have several classic ventures bouncing around in my head with Miwok, Lake City, and Western States being the most prominent. The primary goal this year is to actually race a full, healthy season (I managed to finish one, count it, one actual ultramarathon last year--the White River 50). However, all of those events--despite my most rigorous and assiduous efforts--will surely require more than two hours for me to complete, so at this point, my participation remains largely theoretical. In the meantime, I absolutely plan to continue simply enjoying the relative health and ability I have been granted.

Finally, I recently gave a rather extensive interview to the author of this blog. I found many of Mr. Babinski's questions to be refreshingly engaging, so I thought maybe some of my own blog readers might be interested in the topics covered.
at 5:32 PM

Hope the knee heals up! I notice you have a Vibram Five Fingers link on your blog. Do you run in those much? I've been running since last July (1st time running) exclusively in Five Fingers and am signed up to do my first ultra this April at the Peterson Ridge Rumble 60k in Sisters, Oregon. Do you think running in very minimal shoes like Five Fingers is practical for Ultra's?

I really appreciate your take on life and running and I enjoy the blog posts. Take care,

That is a sweet tractor!

Tony,
It's a sign of the times when I wish I was in the Rockies in Dec./Jan. to take advantage of its runner-friendly weather. I'm stuck in Wahoo (30 mi west of Omaha) with a permanently hunched back due to multitude of 4' drifts and screwed shoes since 1st week of Dec. I am enjoying the recent heat wave of 20s-30s...n-i-c-e!

Take care of the knee and I look forward to a solid season of living vicariously thru you on the trails.

Thanks for the inspiration over the last few years. I have decided to move from shorter distances (marathon and below) to ultras starting with a 50 mile trail run in April. This is due in large part to reading about you and your exploits over the years! Hope your injury is better soon....

Take it easy, and hope to see you at Miwok.

Good to hear you are still getting a few run's in. Take care of that knee!

It would be awesome to have you at Miwok this year.

Tony, I really liked the interview and posted it on Twitter. As a mountain minimalist scholar, I know you don't use such insignificant technologies but I thought you should know anyway. Can't wait to visit Boulder a few times in the spring.

Great interview! Take care of that knee for a great season. I'm curious about the spikes, I might try some for Tahoe. Meanwhile, here in coastal California the monsoon has started, so I need a snorkel first!

Great post! And, I suspect that your 120 minute "governor" will lead to some outstanding results in 2010. In fact, I can feel the rest of the ultra world quaking in their racing flats now:)

There's a great PT in Boulder named Mark Plaatjes (world class marathoner, back in the day). He's fixed a few mechanical issues for me in the past. Might be worth a visit? You can find him through Boulder Running Co., if you're interested. (NFI)

Good luck with the racing season.

You're right - those questions made for an interesting interview. Despite your introverted nature, that offer for dinner still stands. I'd like to learn more about what is you bake. Is that worth a blog entry? Good luck with the knee.

Great to hear you are still running every day Tony. I enjoyed the interview.

On the "running with someone" issue I can attest that when you run with someone who you know is significantly better than yourself you tend to think of ways to get yourself through the run in one piece, without slowing your running buddy down. Psychologically it is mush easier to run in front than run behind, especially if you are worried about being left behind. This probably means that rather than your running buddies trying to prove themselves against you they are more just not wanting to slow you down or, even worse, has to have you wait for them. Maybe you need to let them run with you more regularly to get the message.

I've been dealing with Patellar Tendinitis for over 20 years from fast road racing back in the 80's and just in the past year it is finally starting to clear up. I have been working a lot on my form, something I never used to think about (just get out and run, right?). I read about ChiRunning and Pose and Evolution and it all made sense, so have been working it all into my running and it's working about 80%. Not completely yet, but it is much better.
Now I know you already do the faster cadence, midfoot landing thing, which is what's helping me.
Anyway, best of luck with it and if all you can run is 2 hours at a time, then run 2 in the morning...recover and run 2 hours in the evening ;-)

Best of luck in your 2010 racing season,
Steve

Yes! An interview with insight!

I do run a fair amount in FiveFingers, but rarely on actual mountain trails. Most of the time I'm cruising around town on dirt, grass, or pavement with them for my shorter second run of the day.

Sure, I think it's totally possible to run a trail/mountain ultra in a pair of FiveFingers, but I think it is nearly impossible to perform up to one's full potential in them. The bottom line is that racing fast on trails requires at least a little bit of protection and traction (more than the FFs offer). I may delve into minimalism footwear more in a future post.

Thanks for the response. I look forward to a future post about minimalist footwear.

enjoyed the interview.. the concept of our mind.. what we think we can do.. and the end results.

For me when I was younger "I thought" everything was possible. Life taught me over the years that it was not possible which makes doing the races, the runs all that much more difficult.

The races, the training runs in the forest help me to unlearn all that life has taught me..

giving me a chance to do things.. that the rest of the world does not think is possible at my age; 53.

Thanks for the blogs.. i enjoy reading.. and learning.

Hey Anton,
I'm sure you're getting a ton of "G see this guy" emails/comments. Here's another one.
Schedule an appointment with Josh for Muscle Testing/Activation (aka muscle restoration). Before the appointment, go do a long run that aggravates the knee.
Good luck with the season.
-ultra wannabe

Forgot Josh's address.
It's http://www.tri-massage.com/
You can schedule online.

Appease the Mountain Gods.
Get and stay healthy dude.