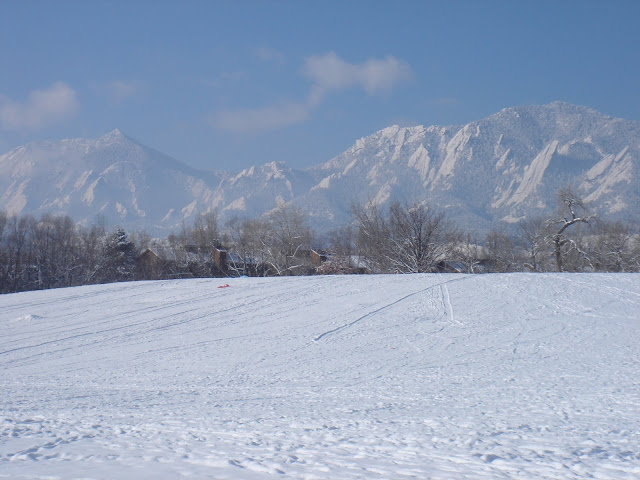 Today's run was borderline great.  My back seems to have improved with the increase in running, which is a strange phenomenon that I've experienced with other injuries before, but it always baffles/amazes me whenever that's the case.  I haven't ventured beyond Green Mt. since last October, so it was a real treat today to cruise up on Bear's high west ridge even if all views were completely obscured by dense fog and blowing snow.  I can't say that the back was entirely pain-free, but right now it seems manageable, and hopefully it will just continue to improve over the next week.  Also, the knee was basically 100% pain-free on what was nearly a 3hr run, so that's another good sign.

This winter I have sort of been stuck in the philosophy that if I was going to be running, especially uphill, then it should be on the trails of Green Mt in pursuit of another summit to add to the tally.  I guess maybe my short hiatus this past week served to adjust that hitch in my thinking and I gladly ran uphill on my second-favorite Boulder mountain this morning: Bear Peak (which typically has the best view from the top, but maybe the poorest footing if ascending/descending Fern Canyon--however, after scouring the Internet, I was able to find the OSMP's Trail Condition Monitoring page and this report shows that "upper Fern" is on the docket for 2010!  Very exciting news if you're a mountain runner in Boulder!  Let's hope they get on that as soon as the snow melts.  Also, I am more than willing to help.).

As a result of the receding snow (Bear's West Ridge Trail normally doesn't see nearly as consistent of traffic in the winter as the trails on Green Mountain), an improved knee, and me being able to sniff the end of my 100 summits in 100 days quest I'm pretty sure I'll start venturing over to Boulder OSMP's other 8000+' peaks (Bear and South Boulder) more regularly and will keep a tally of those ascents as well.

Other than that, there's not much else to say.  Just gotta stay healthy.  Also, a tight little ballad courtesy of The Walkmen that I've been enjoying lately:

"It's crazy the effect that running has on my psyche and ability to function in day-to-day life."

I hear ya on that - when anything interrupts the running routine, I struggle to focus at work, can't maintain basic relationships, and am generally unpleasant. Things as basic as going out for lunch are interrupted because I don't want to walk any extra.

Sorry to hear about your pains Anton! I know how it goes man..life is ugly when the running is not happening the way we want.

Have you ever considered going totally barefoot? It gives you better bio feedback and one tends to run more lightly and mindfully.I am a barefoot runner myself.

Glad to hear there is a mending going on there. I too have found that in about half of my injuries, I seem to work through them more effectively by running through them. Weird.

In any case, South Boulder Peak is my favorite. It is not the best for views, but I think it might be my favorite because it is the quietest. Or the highest. Or you can see Pikes best from it.

GZ,
Yeah, but SoBo's the longest run from where I live, and seems almost pointless after summiting Bear...although today, as I was sitting in the wind shadow on top of Bear, sequestered in a snowing cloud, I seriously thought about tagging it for about three seconds--then I went and scampered down Fern instead.

I have to put March 14th down as a day to remember..I ran as many miles as Tony K (in my MT100's)! Of course it was my longest run ever, and you are injured...but why sweat the details?!

Seriously though, I have really enjoyed your blog recently. Taking the time to share your inner thoughts has made me think about my goals and running more than normal.

Down weeks never hurt even "the best". In many ways this may teach you something about yourself that you've never discovered before. You'll bounce back. You are to young not to.

Ug...heal fast. My back hurts too right now but I didn't fall. I'm just old and not running makes me a poor mother/employee/spouse...horrible ripple effect.

Anton, sorry to hear about your back. I have a couple of things you might want to try. Years ago I suffered from chronic back pain until I went to see a Chinese herbalist in Los Angeles, CA. She attributed my back pain to inflammed kidneys. She had me brew this "potion" consisting of herbs and insects. I drank it twice a day for 7 days to cleanse my kidney. I gradually felt better each day and on the 10th day, my back felt 100%. My back felt good for three of years until the next occurrence. I went through the same routine which got rid of my back pain the 2nd time around. It's been over 5 years without a recurrence. Consultation and a week supply of the Chinese herbs cost $100. Her contact info can be found here: http://hipwoohong.com/

Another option to look into is the Egsocue Method. My boss at work suffered from chronic back pain last year and could barely walk and stand without pain. I suggested the Chinese herbalist to him and he tried it with mild improvement. More recently, he tried the Egoscue Method for 8 weeks and has completely gotten rid of his back pain. He's like a new person. 8 week session will cost $1600. They offer free consultation with the first visit. http://www.egoscue.com/

On the few occasions where I've injured a back muscle, the best cure seemed to be deadlifts. Resuming activity again appears to do more for those muscles than if you simply rested until the pain disappeared. Running with good form engages your core muscles, so it doesn't surprise me that it would help speed up the recovery.

Talk about your feelings but also with a good friend or family members who have had this experience myself.