Hagerman Pass and the Angle of Repose 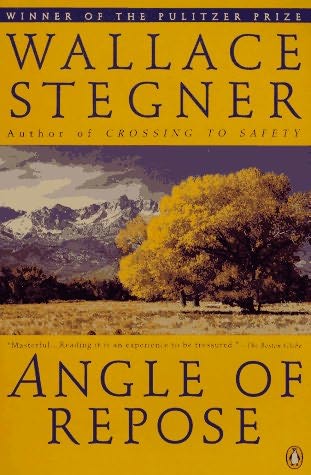 The 1972 Pulitzer Prize-winning novel by Wallace Stegner Angle of Repose is partly located in what I feel to be my second home of Leadville, CO.  (Of all the "second homes" that exist in and around the Leadville region, I would bet that mine is likely the only one that consists merely of a small, trampled patch of oxygen-deprived, grass-like vegetation that lies betwixt a few pine trees and random piles of discarded trash (not mine), and could only be vaguely designated "mine" by an extremely loose adherence to some sort of probably quasi-illegal Squatter's Rights.  I'll say no more for fear of legal action.)

However, the "angle of repose" I have been thinking of today is even more metaphorical than Stegner's title.  I'm talking about resting.  You see, it is Tuesday, which means I'm tired.  Or rather, still tired.  It is not as bad this week as last (because, ostensibly, my fitness is improving), but for the past three or four weeks, the weekend's serving of mountains and miles has left me predictably stymied for the first two days of the next week.  By Wednesday, my stride usually regains most of its bounce and vigor, and come Thursday morning I'm ready to take on anything the peaks can throw at me yet again.

In Leadville this past summer, though, it was often different.  The difference was that instead of the steep slopes of Green Mountain, Monday mornings each and every week consisted of Hagerman Pass.  I loved running up to Hagerman Pass.  The route was simple, symmetrical, and perfectly fit everything I was looking for in a Monday recovery run: a shallow, forgiving grade (i.e., an "angle of repose" in the sense that the road was at an angle which allowed me to rest), fantastic scenery to distract and inspire my typically weary mind, and a worthy summit. 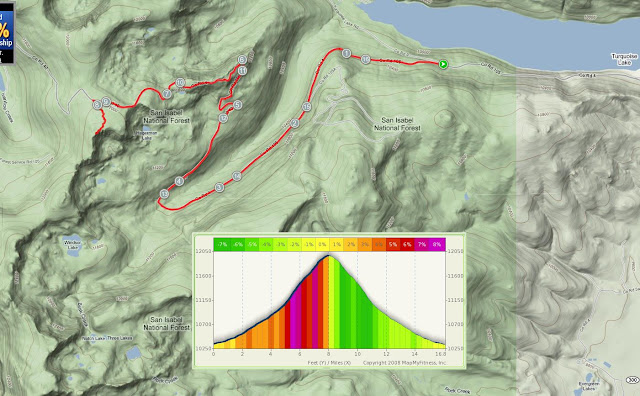 (Curiously, probably my favorite run in Leadville.)
From where the dirt road started off of the paved road on Turquoise Lake's south shore to the 12,000' summit on the Continental Divide, it was exactly 8 miles.  Another 0.4 miles of jogging up the ridge to the south offered a couple hundred extra feet of altitude and, more importantly, a seat on a rock overlooking a nearly 1000' drop into a magnificent glacial cirque forming the face of the Divide.  I would sit on this rock forever, just soaking up the sun, gazing at the view, feeling the breeze on my face, chomping idly on a snowball.  Eventually, though, I would stand up, take one last look west, and pad back down the hill, exactly the way I'd come. 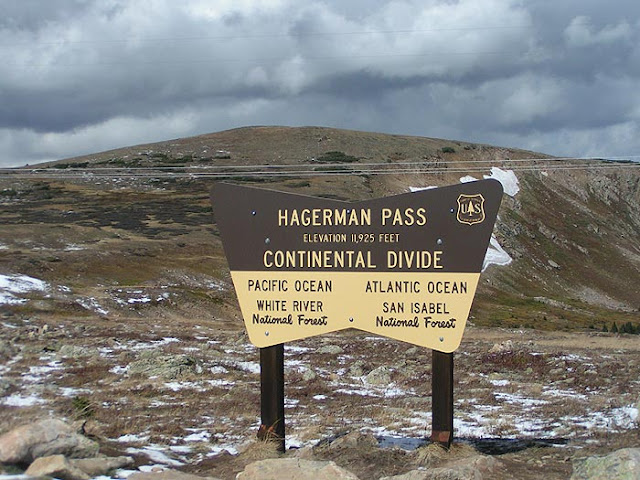 (The pass itself is fairly unremarkable.)
These 17 mile jaunts would start gloriously slowly.  Easing into the effort was paramount.  In fact, despite the 2000' of gain, the goal for the morning was always to feel essentially no effort.  Without fail, though, by the end, and aided by the gentle 3-4% downhill, my legs would feel alive, awake, and better than when I'd started.  A summit view, two and a half hours of getting the heart pumping, mission accomplished.  Tuesday morning the legs were rarin' and ready again to run up a 14er, usually Massive or Elbert. 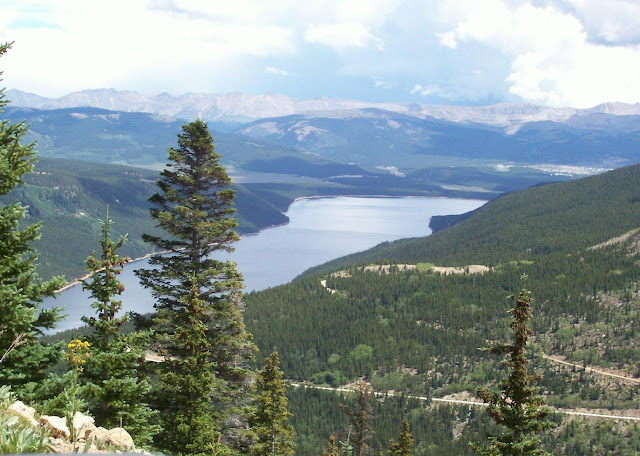 (Looking back east towards Turquoise Lake, the venerable Mosquito Range and Leadville, from high on the road.)
It was weird, though.  I mean, the route was a road (albeit, an exceedingly narrow, rocky one after the first four miles) and I'm always seeking the perfect ribbon of singletrack.  A friend stopped in town for a couple days, and--of all the incredible trails in the Leadville area--what run do I take him on?  Hagerman Pass.  By the end of the summer, it was maybe the run I looked forward to most.  When I head back up there for the first time this summer, it might be the first run I do. (Headed up to Hagerman Pass for the last time this past summer. Photo: Rob O'Dea)
I know that the grades of Green Mountain here in Boulder don't offer me the same chance at recovery as Hagerman Pass Road did in Leadville, but it's still tough for me to stay away.  The pull of the summit is too strong.  The desire to leave behind the streets and concrete and crowds too great.  So, I'll probably just stick to my now-familiar rhythm of weekend energy and long runs and weekday fatigue, recovery, and 8000' peaks, instead of finding a new Monday route with a more appropriate angle of repose.
at 2:29 PM

Read the Angle of Repose in college (no blogs, heck, no internet then) as part of my Natural Resource and Recreation studies before critical theory and creative writing swallowed up my schoolin' . He was, Like yourself, a gifted writer.

Don't you think that with your improving fitness the perceived angle of your common Monday runs edges closer to that angle of repose?

Luv me some Stegner.

AJW,
Really! What was the topic of your thesis? I love all those guys' writing (maybe Berry the most).

Enjoy ZG...kinda wishing I had the cojones to hit up those rocks only a week before Miwok.

Nice choice..In my top three books of all time! I think of it every time I am in Leadville.
Read "Everett Ruess: A Vagabond for Beauty" when you get the chance. You write like Everett did.

I appreciated that book, but did not like it. Such sad lives...and the poor roses. ;-(

I would much rather run ;-)

Haven't read "Angle of Repose" but did read "Crossing to Safety," "All the Little Live Things" and "Collected Short Stories." It's great to see so many runners into Stegner!

My thesis was titled "Wildness in America or American Wildness?" There was more but you get the gyst. And, it was a long time ago:)

I attended an East Coast University (Villanova) so I was pretty much on my own. But, I was able to actually spend time with Stegner (before he died) as well as Berry, in researching the project. I, too, find Berry's ideas most interesting.

And, in the end, the project led me to where I am today (such as it is!)

Tony, there aren't that many rocks on the ZG course, go for it. I imagine you'll be fully recovered, if not we can always party in SF a couple days beforehand and get you well rested.

When you be racing your 100k 1st may, i will be doing my second marathon in my life (never run longer)here in Poland also on 1st may.
Im gonna run ultra soon, but im only 23 years old, so i will wait few years for this (im not as talented as You)
Wish you luck and I`ll be thinking about you on this run on 1st may:)

Great stuff! Inspiring to see how other runners are literature geeks as well.

Coincidentally, just encountered Stegner in the "The Last Season," nonfiction account of a Sierra park ranger Randy Morgenson's disappearance (Morgenson had some correspondence with Stegner regarding his own writing), so "Angle of Repose" is now in the reading list.

Keep up the solid writing and running...more metaphors please!

Your a sick ass runner,keep it up old boy,what about getting your butt over here to the UK and trying to break the west highland way record? bet you dont run without a top on?
Or do a coast to coast stateside or Alaska to Fuego!Now thats a challenge