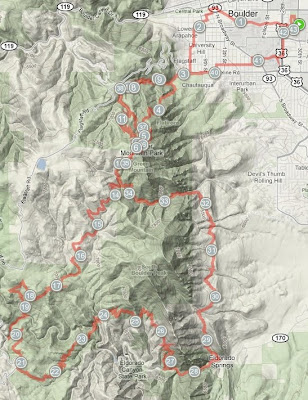 (43 miles, 6h20min, 3xGreen Mt., 11,000' climbing)
Today was an encouraging outing on Boulder's trails.  The past ten days have still left a fair number of questions/reservations in my mind about the relative wisdom in deciding to race at Western States.  Will my knee recover afterwards?  Will my knee allow me to prepare the way I'd like?  Will my knee even allow me to get to the starting line?
The past few days--and especially today--set a lot of those questions to rest, and in a positive way.  Thursday's nearly four hour run up and down Mt. Evans went flawlessly despite my doubts about my knee's ability to withstand an hour-plus of pounding downhill on pavement.  And then today's romp through the mountains and canyons of Boulder reaffirmed that things are definitely headed in the right direction.
Today I completed a route that, since my build-up for Miwok, has become somewhat of my default long run: log a lap or two on Green Mt.; head out to Walker Ranch and cruise around its relentlessly hilly loop; trundle my way through maybe the scenic highlight of the run, Eldorado Canyon; and then make my way back to Boulder along the Mesa Trail for a final lap or two on Green again.  These trails offer borderline absurd amounts of vertical gain and an engaging mix of fast, smooth singletrack and steep, technical ascents and descents that while certainly very very tough, all remain runnable. 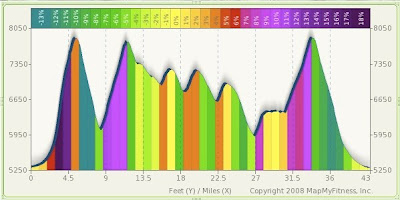 (Two laps of Green, the bumps of Walker, and then another ascent of Green.)
Today, my knee handled it all with aplomb.  Not a single whinny from down there.  Which is more than I can say for any of the long runs I did in the lead-up to Miwok.  At some point in each of the major long runs before that race I would get at least a short stretch where the knee would become a bit achey and twingy before returning to a pain-free state.  Maybe the hip strengthening exercises and Allison's acupuncture are working?
It was legitimately warm out today.  Days like today are why I'm not living in Leadville this summer.  It doesn't get hot in Leadville.  (And by the time heat is no longer a priority for me (post-WS) Jocelyn will have returned from Peru and I'll always choose her, even over the high mountains.)  Yesterday the mercury hit 92F here in Boulder and for most of the run today the temps had to be in the 80s.  I knew I would be riding the hydration edge a bit by only taking one bottle with me from the base of Green to get me the two and half hours of running back up the mountain, around Walker, and through Eldorado Canyon to the visitor center's fountain, but I was kind of hoping to shock the body a little, too, to train it to hold onto it's water a little better (hmmm...I wonder if that's even physiologically feasible?).
I ran out of water about 30min out from the Eldo trailhead (right when I was standing around gabbing with Nick, Justin, and Nick P, out on a good, long excursion of their own today. There were lots of friends out today--saw Brandon and Jim, too, doing a Skyline Traverse. I had about another 22min of chat-stops, mountain-top gazing, etc. in addition to the 6h20 of running time), and when I made it to the fountain I got to work filling the ol' fashioned Camelbak--my stomach.  I'm pretty sure the first 22oz bottle was absorbed directly into my bloodstream with nary a pause in my belly, and the second and third took only slightly more work to get down.  After 70oz of water and a gel, the remaining uphills back over to Bear Canyon sure were a lot easier.
This morning I had vague intentions of trying to get four laps on Green today, but when I hit the steep sections of the Green-Bear Trail (the two Nicks and Justin were witness to pretty much the apex of my suffering on that little climb) I knew that three would have to do.  I was worked.  And, I was out of gels. However, despite not really having very solid climbing legs all day (in the morning I hit ascents of 34:30 up Amp-SR-Greenman and 37:45 up Gregory-Ranger--I was expecting a minute or so faster on each of those), my downhill chops were definitely there.  Even on the final 3mi/2500' descent off of Green Mt. my quads felt as fresh as they did at the beginning of the run.  So, things are coming along.
In a fairly informal (at least it felt that way when Duncan was conducting it) interview for competitor.com, I was asked what I think about for all those solo hours on the trail without an iPod to keep me company.  Although part of my answer astonishingly made Letsrun.com's Quote of the Day (truly, the absolute zenith of any runner's career), I failed to mention that there is often plenty of music playing when I'm out running.  It's just all stuck in my head.
Today, this rousing track was on repeat, which I was quite fine with:
at 5:29 PM

Anton -just like the knee, your taste in music is holding up well.Happy trails -keep riding the wind.

Train the body to hold its water? Definitely, http://runningtimes.com/Print.aspx?articleID=12467

I read a different article a while back but can't find it right now, it mentioned more of the science behind training your body to conserve water just like you're doing Anton.

Saw a lion slip across the trail while descending Bear Canyon this afternoon. It was near where the trail narrows in the last 1/2 mile or so before Mesa. Keep your eyes peeled.

Great to hear Tony! My quads are still sore from Evans on Thursday, sounds like you are way past that.

mtnrunner2- A mountain lion sighting, sweet! My friend Kraig just saw a large bear at the base of Bear Peak. I have yet to be so lucky.

mtnrunner2-I'm deeply jealous of you having a mt lion sighting in Bear Canyon...I'm sure they've seen me many times, but out of all my miles on trails I've never had the pleasure of glimpsing a lion.

Jeff-I saw a black bear at the base of Amphitheater last fall and another one on the Mesa trail last fall, too.

Great job on the long run Tony! That heat training will certainly bode you well in the canyons at Western. Nice to see you back in form. No doubt it does wonders for your confidence.

Holding water in the body....ask any woman...we will tell you about water retention!
All kidding aside, it is quite possible to condition the body to utilize water and energy very efficiently. Just like logging miles, limiting your water intake and forcing your body to adapt will condition you to use what you have already. There does come a point where the fluid must be replaced. Personally, I have conditioned myself to run a 50K or even a 50 miler on just a few gels and some electrolyte replacement....with no bonking...in fact ingesting vast amounts of calories does not set well....

I've seen a bear (same one?) at the base of the aptly named Bear Peak two times now. Once in the fall when the apple trees had fruit (http://tinyurl.com/254yewu), and then again last week, near where Mesa meets the Shadow Canyon trail, there's an old cabin there. It was in the bushes and I could hear it lifting rocks and letting them drop with a thud. Probably looking for yummy creepy-crawlers to eat.

I make noise when I run that section.

Jeff, Anton:
I'd be happy to let you guys see the lion next time instead of me ;) I was a bit freaked out, and went back up trail until I found some more people to descend with. I barely saw it slinking across the trail into the woods. I have a feeling the rushing water in that section masked the sound of my feet, otherwise I never would have caught it in the open like that.

Dude, you are safe from the cats. There isn't enough meat on you to make it interesting for them.

I read the interview and your blog has helped me balance my love of being deep in the wilderness alone with a minimalist POV compared to the sponsorship that trail running is taking. Racing is fun and I have local guys I like to see win, but a union with nature has its part in it. I have seen mountain lions and too many bears -- I am on the North Shore of Vancouver.

A mountain lion was in my front yard twice last year.

You mentioned hip strengthening and was wondering what exactly you've been doing in that regard.