Searching For The Routine

The last three weeks have been pretty hectic for me.  In the lead-up to a big race like this year's Western States 100, my life tends to take on a borderline ascetic existence.  Each day is extremely predictable in its activities and very little is allowed to disrupt the necessities of running and recovering from running.  This might sound like a somewhat miserable way to go through life, but I definitely find a measure of comfort in the familiarity and rhythm of a daily routine, and really, I think it's the only way that one can sustain--both mentally and physically--a truly high level of training.

How high?  In the first six months of 2010--a relevant training block punctuated with the coda of Western States--I ran:

And some other dude still beat me by six minutes.  That's how it goes some times. 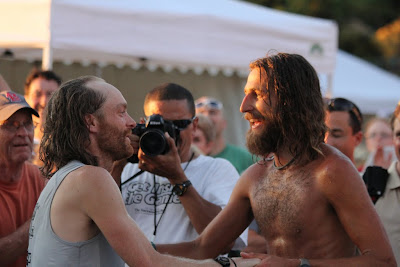 (This dude, actually.)
The last three weeks have been far different.  The two days after Western States, I didn't run a step (the first days I took off all year), mostly because I really couldn't.  I drove back to Boulder, CO, got in a couple extremely short and laughably slow runs, and then drove home to Nebraska for a 4th of July family reunion in South Dakota.  Other than offering a very good excuse for taking it very easy getting back into running, it provided an in-my-face reminder of how miserable wind, heat/humidity, and mosquitos can be.  There are some things I don't miss about my Great Plains roots.

After that it was another big road trip back to Boulder where life became complicated yet again (but, in a fantastic way) with Jocelyn's return to Colorado, a tight hamstring, and a three-day video shoot in Boulder's Mountain Parks for the forthcoming New Balance Minimus line.  During this time I also had the pleasure of spending some time hanging out with fellow WS-competitor Kilian Jornet and other friends here in Boulder (his English has significantly improved even since race day) as he took a whirlwind tour of the western US before heading back home to Europe. 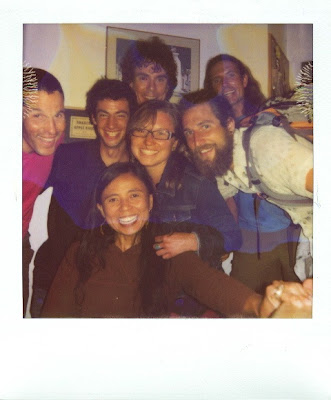 (jLu tests out her Polaroid camera b-day gift.)
So, after two weeks of 34 miles and 79 miles and a couple of key visits to Allison Suddard for acupuncture, I've been spending this week just trying to transition back into a more routine and familiar lifestyle that will hopefully involve a lot more running and frequent trips to the high country both to appreciate its rare snow-free state and to prepare for end-of-the-summer races.  I'm confident it will all come together again soon.
at 2:41 PM

Seeing the camaraderie among guys like you, Killian, Jurek, Roes, etc is yet another reason our sport is so unique from the rest. Where else can you have two guys battle it out for 70+ miles one week and then go ziplining the next?

Take it easy and go kick some butt at Leadville or whatever you decide to run next.

Not much I can add that Billy didn't already say. Just wondering? Is that Scott Jurek's pacer - Dusty? Thought he looked familiar in that photo as I ran with him a bit at the 2005 White River 50M.

3k miles and over a half a million feet of ascent. Wow. Hope you got the extended warranty.

There's a lot of running talent packed into those photos. Man.

Should be fun to watch.

Funny, I actually wondered if Kilian's English would get better during his stay. Nothing like hanging out with the locals to do that.

Oh, so this begs the question: what is the plan for that end of summer racing? Pb? PPM?

There's a lady that walks around town with a Polaroid hanging around her neck and prints in her hands. Every time I see her she's like this. Must be something special about Polaroids. I want one.

It's posts like these that make your blog a favorite of mine. Enjoy.

thanks for the inspiration

I like you...for so many reasons. Thanks for writing so honestly.

The time spent on trails is enough. Your vision, your beliefs broaden that picture. Enjoy the coming weeks.

Vibram five fingers,which will let you be full of fashion, relive the experience of barefoot and call back childhood memories.

HAHA, Killian looks wasted. Nice race. Thanks for the entertainment.

I'm a local Spanish teacher and was going to offer you lessons on-the-trail but just got a stress fracture after five months of barefoot and my first 70 mile week.

Keep writing; my running fixes will have to be vicarious for a while.

It will be nice to see you running in Catalonia at Kilian's home. I hope somebody sends you an invitation.
Anyway, have a nice come back to the running!

Glad to have to back writing and running A. Congrats on a fabulous race and the comradery the race brought out. Good luck in Leadville and glad your knee is doing well. Looking forward to seeing the NB video.

"The familiarity and rhythm of a daily routine... it's the only way that one can sustain--both mentally and physically--a truly high level of training."

P.S.
If there was a "pay for Anton to go and race Roes and Journet at UTMB" fund, I'd be donating to it!