10-18-2011
Tue-AM: 1:38, 2800' ~ Green Mt.
Up 3rd access and down the front. This involved 27+ min of running from my door to the base of the 2nd Flatiron (trail really kicks up after that) and then another 13min of running home from the base of Amphitheater. More spectacular than usual sunrise.
PM:  1:19, 2500' ~ Green Mt.
Up and down the front. Shin tightened up a bit on the hike up, so I took it pretty casually. Shouldn't have done that extra 10min of steeper running this morning.

10-19-2011
Wed-AM: 1:19, 2500' ~ Green Mt.
Exact same outing as last night, but maybe 30sec faster on the way up. All hiking. Shin is tight. Cold morning in the lower 30s!
PM: 1:24, 2600' ~ Green Mt.
Up 3rd access and down 1st/2nd with Jeff and Aron. All hiking. On the way down we hung out at the base of the First Flatiron for a bit watching the scramblers rip up the East Face. Pretty inspiring watching Stefan and others literally run up the first thin 5.6 pitch in a pair of Crosslites like it was a 3rd Class slab. Stefan completed the Chat-to-Chat roundtrip (including the downclimb, eschewing the 100ft rappel) in an impressive 34:02, less than a minute off the FKT (which he holds).

10-22-2011
Sat- 5:29, 7000' ~ Almagre Mt. + Incline
Went down to Colorado Springs this morning to take advantage of the late-season snow-free-ness that the Pikes Peak region still offers at high altitudes. Parked at the upper Gold Camp lot (top of Cheyenne Canyon Dr, 7500') and hiked up 7 Bridges to Jones Park and then kept going up Bear Creek to the base of Almagre's north ridge at 10,100'.  Left the trail here at 1:31 and fought through the loose gravel to gain the ridge at ~11,200'.  Stayed right on the ridge all the way to the summit, mostly boulder-hopping and scrambling with enough snow to spice things up and keep it interesting. From the summit I went south to Stratton Reservoir and the headwaters of North Cheyenne Creek where I took the goat path down the canyon and essentially followed the creek drainage all the way back to the car (on trails), some official, some not. Upon finishing I immediately drove the ~15min over to Ruxton Ave in Manitou and ground up the Incline in 22:48, descending Barr Trail.

I started out the week quite optimistic about my shin, but a slight transgression on Tuesday morning put it just a little back over the edge and I was stuck with hiking the rest of the week.  On top of that, I was just plain tired this week.  I guess vert takes its toll, even if it's not technically running.  The week ended on a highlight, though, with my day-trip to the Springs on Saturday.

Pikes Peak has a unique climate all its own that usually means it's the state's 14er that stays snow-free(ish) the latest in the fall and becomes comfortably(ish) foot-traffic accessible the earliest in the spring.  Each year I try to take advantage of this by making my way up into the alpine down there one last time, usually around Halloween.  This year, I was interested in a trip up and over Almagre Mountain (Pikes' 12,400' little brother to the south) because the trails down there are steeper and more direct than the heavily-switchbacked and gradual Barr Trail on Pikes Peak.  Indeed, by taking the Seven Bridges Trail up North Cheyenne Canyon and then continuing on other less-traveled (but easily followed) paths further up the drainage, one can gain nearly 5000' in little more than six miles.  Not bad.

My ascent of the north ridge of Almagre, though, turned out to be a bit less ideal than I'd hoped.  This ridge looks like a fabulous and logical line on maps and from a distance, and in reality the ridge itself was quite a lot of fun--airy but nowhere-near-fatal exposure on both sides with solid tundra and boulder fields on its upper reaches--but the first 1000' required to gain that ridge was a giant pain in the ass.

Geologically, the Pikes Peak Massif is an enormous igneous intrusion of Pikes Peak Granite, which exists in various stages of decomposition.  This granite starts out as a suitably solid material (the mountain exists, afterall) but over time (and at varying rates) weathers first to chossy rock, then a relatively unstable rock-like matrix, and finally the ubiquitous Pikes Peak gravel that is the defining characteristic of the region's trails.  The lower reaches of Almagre's north ridge is dominated by this gravel, giving it all the shiftiness and solidity of a sand dune.  It took me 50min to go maybe a mile and a half (granted, this included over 2k' of vertical, but with better footing I could've easily dispatched of this in less than 30min), and left me with little desire to ever struggle through this line again, let alone establish it as a regular part of my outings in the region.  Other than for some very short-lived sockless postholing in a shaded canyon, the rest of the loop was fantastic.

I punctuated the day with a quick lap on Manitou's Incline.  This hugely popular staircase of railroad ties offers up 2000' of vert in one mile, about as stout and constant a climb as you'll be able to find anywhere without venturing into consistent 4th or 5th Class territory.  Despite living in the Springs for seven years, Saturday was only the third or fourth time I've ever climbed the Incline, and the first time since my freshman year of college 10 years ago (due to my before-now largely anti-hiking bias, I suppose).  Even with all of the very specific hiking I've been doing lately, it was really tough.  Part of that was the fact that it came at the end of an already big day with way too few calories, but by time I'd crawled my way to the top I realized that this particular climb has a lot to teach me--I hope to get back on it sometime soon, and often. Sub-20min feels like a good goal. 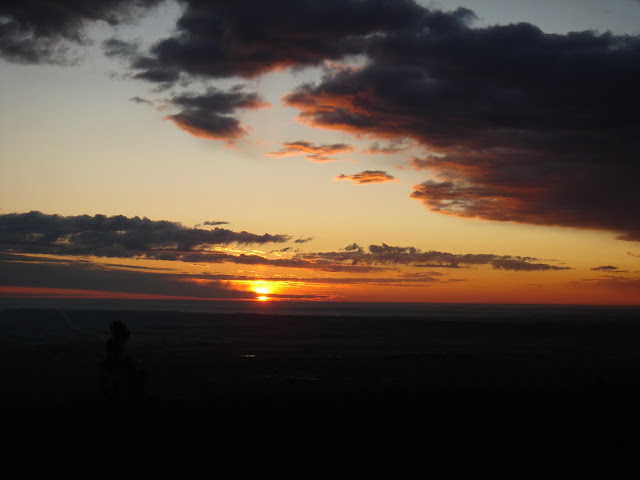 The last photo reminds me of one I saw of Matt Carpenter once... same trail I'm assuming.

Dig the header photo. My browser initially painted it weird so that only the left side of your head painted (well, actually your right side but the left of the photo). Looked like you had short hair for a sec.

Most painful thing on that recap of the week looks to be the Mark P visit.

Long time ago I was a geologist. I get a grin when you talk massif and plutons. Ever read Philpotts book on Igneous Petrology (not sure if that is still the standby in that arena)?

I think it may be time for you to go back to the mutton chops, those are awesome! Seriously though, thanks for the inspiration.

Brings back good memories of last summer...digging the pics too.

My one and only Incline run required me to carry a can of PBR along and chug it at the top then run back down. I was told that is was like it was the law down there or something.

Cute climbs, pity there aren´t any mountains in Finland. Just have to run small hills back and forth, over and over again. What shoes you use nowadays? Minimus zeros?

Glad to see more running in your blog, I heard you're pretty into that stuff.

Looks like a great day in the springs, similarly in LA we've got Bear cyn up Mt. Baldy, a 6.4 mi climb 5800 ft up (except Mt. Baldy is only 10,050 ft). Still, it's summittable in flats year round (sometimes with microspikes)

Winter Running: Hobnails or Yaktrax? Other?

can't really imagine running/hiking through so much pain. You really are developing some Robocop shin:)
I suspect there must be some very real UTMB? ambition driving you.
so inspiring. beautiful photos too.

Mike - Yeah, probably this one.

GZ - I was never really into Ig Pet. Much more of a structure and geomorph guy. Now it's all hydrology, hydrogeology, and some structure.

Dominic - I'd love to get up Baldy sometime soon; sweet that it's runnable virtually year-round.

Tom - For winter running on the local steep trails it's all about Kahtoola Microspikes. Before moving to Boulder I would just occasionally put some sheet metal screws in my shoes and was highly skeptical of factory traction devices but the steep trails here make screws almost worthless most of the time. Yaktrax are also worthless on the terrain I run, not to mention will usually break the first time out. Microspikes are incredible on packed snow and ice--seriously magic grip--and highly durable. Also, I typically run 1+ mile of streets before getting to trails, so it's nice to be able to take the traction off and on, unlike the permanence of screws or hobnails. Seriously, the winter running I do wouldn't be possible without Microspikes.

Depending on snow levels this winter, I'll probably be looking into Kahtoola's KTS running crampons, too. But those are for the really steep and deep stuff.

Ah, so if memory serves me - is Domenico and Schwartz still a text floating around? Hydro is awesome stuff ... you need to drop some Q, head, and flow diagrams in these posts.

Have you ever read the book "the joy of running" ?

I am a freshman here at CC training for an Ultra after XC season. Thanks for all the awesome route ideas around C springs! I did one off Gold Camp Rd, and it was amazing.

wow just awesome these places ... I really do ... that's what I call a top athlete ... Carolina - paginas web