10-29-2012
Mon-AM: 1:37, 3300' ~ Third Flatiron+Green Mt.
Most of the snow was gone, so enjoyed a nice day on the hill. The wind on the last pitch of the scramble made it feel really sketchy on the downclimb, but I made it through.  Took a long descent down Greenman and Gregory and was really psyched to feel nothing in my fibula.  Jeff's massage seems to have really worked.
PM: 0:41, 1600' ~ First Flatiron
Cruisy quick lap on the Flattie before the sun set, from Chautauqua.  Leg felt great, really nice warm evening.

l0-31-2012
Wed-AM: 2:58, 5000' ~ Longs Peak (14,255')
Joe and I started from the East TH and took the Reveley Route over the shoulder of Mt Lady Washington to the base of the old Cables Route on the North Face where we donned crampons and headed up the relatively short, iced-in dihedral that goes at 5.4 in summer conditions.  I was in a pair of steel Kahtoola KTS crampons and was very impressed at their lightweight performance on both steep ice and rock. Descended via the Keyhole before cutting back over the shoulder of MLW and back down to the trailhead.  Weather conditions were ideal with reasonable temps, moderate winds, and clear skies. Metal traction was only mandatory from Chasm View to the summit.  This happened to be my 100th 14er summit of the year and my 14th summit of Longs Peak this year (but June was the first time I'd ever been up Longs, so my 14th summit ever of the mountain, too.).

11-01-2012
Thu-AM: 2:04, 4500' ~ Flatiron Trifecta+Green Mt.
Linked-up the 1st, 2nd, and 3rd Flatirons before heading to the top of the mountain and running back down to Chat via Ranger-Gregory. Haven't completed this enchainment in a couple of months, so it was fun to string together what ends up being ~2500' of scrambling.
PM: 1:08, 3000' ~ First Flatiron+Green Mt.
Quick spin up the hill, with a snappy 12:45 scramble of the east face. Timed it perfectly to get back to Chat right as it was getting dark.

11-02-2012
Fri-AM: 2:31, 4500' ~ Torreys & Grays Peaks (14,270' & 14,267')
Parked half-way up the road and summited Torreys via the Kelso Ridge before bopping over and tagging Grays, too.  Conditions were pretty nice, frigid on the summits, but not terrible and the snow wasn't too troubling on the ridge.  My energy on the uphills, however, was rock-bottom.  I had nothing.  But, on the downhills my legs seemed to have plenty of pep, so maybe just the altitude affecting me?
PM: 1:00, 700' ~ East Leadville trails
Nice, peppy cruise at sunset (which was amazing).  It was fun to feel good after feeling so wasted this morning.

11-03-2012
Sat-AM: 2:53, 6000' ~ Belford-Oxford-Belford (14,197' & 14,153')
From the Missouri Gulch TH. Seriously seemed like maybe September conditions. I took Microspikes but never needed them; any snow was either powdery and trivial or nicely-packed and my shoes gripped fine. Took me a long time to get into the sun, but once I was it was warm...unless there was a breeze. Then it got cold real quick. Overall, a beautiful morning, though.
PM: 1:07, 2200' ~ Mt. Sherman (14,036')
From Iowa Gulch. Got this in quick, finishing just as it got too dark to really run. Felt really good on the uphill, which was encouraging because I've been really struggling with energy above treeline this week. Once on the ridge it was crazy windy (and cold) but manageable. Pretty cool to be watching the sun setting over the Sawatch from the other side of the valley.

11-04-2012
Sun-AM: 2:56, 5000' ~ Mt. Massive (14,421')
Started from the Half Moon TH and went up the east slopes before descending the southwest slopes.  Not too much snow to deal with ever, but the wind above treeline was pretty bad.  Lots of hunkering down in my hood just marching up into the gale. The run down was much more pleasant and it was fun to do the run as a loop instead of the usual out-and-back that happens on 14ers.
PM: 1:20, 1700' ~ Stairway To Heaven
Started from NOAA with Joe and jogged up Skunk Canyon to the base of the Stairway To Heaven rock ridge on the north side of the canyon. Found some exceptionally good rock in places with wild exposure (typical of the flatirons) and then just some 3rd-4th Class scrambling in other spots. The summits of Like Heaven and Heaven were totally worthwhile, though, especially with the stunning views of Satan's Slab immediately to the west. Getting off the rock was a touch hairier than expected, but the downclimb will be way easier doing it a second time. Jogged back down to the car after some casual exploring around.

Well, this marks the first week back to full activity after my three weeks of doing mostly nothing.  Much credit must be given to Jeff Staron, who largely fixed my fibula/peroneal injury with one incredibly painful visit last Friday.  When Rickey Gates first recommended Jeff, he claimed he was a miracle worker.  Now I believe it.  I also finally moved into an apartment this week after seven months in the Roost.  Of course, I then promptly went on a three-day trip back to the big mountains.

My efforts at altitude this week have been all over the place.  Except for Longs Peak on Wednesday and Mt. Sherman Saturday evening I have invariably felt like an utter sloth when trying to go uphill above treeline.  I know that shouldn't be surprising, but in past instances of re-acclimating to altitude it hasn't been this sluggish of a process, so I'm beginning to wonder if maybe I'm dealing with a bit of an iron deficiency.  I'll probably give it another week before I become truly concerned.  Either way, it's been a blast getting back to the high country, and nice to experience the big mountains in a different season.

Some video footage of our ascent of Longs on Wednesday, courtesy of Joe. 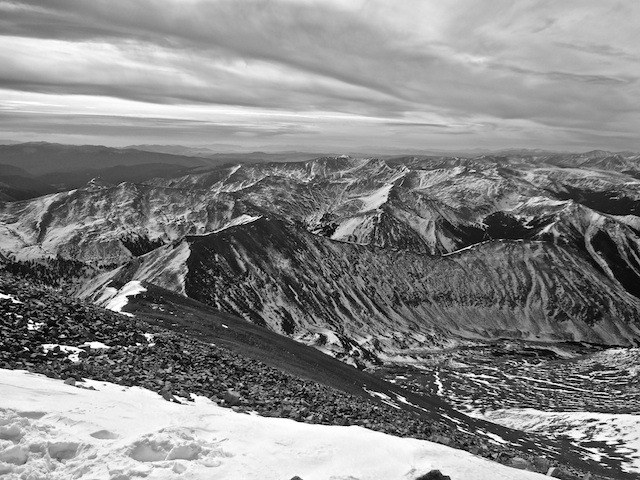 Wow, an apartment, how will you ever find anything?
Glad to hear about the week of no pain, that's always a great thing!

On Thursday afternoon, as I was going down Flatiron, I was thinking... would it be cool to see Anton running?
And I did..... said hi to you quickly as you were flying up the mountain!
Great blog!!

Great post! I clicked on the link about living out of your truck. Really enjoyed reading your thoughts on that!! Glad your posting again after taking three weeks off!!

Sisyphus ascends in your shadow.

Keep the fire burning, Anton. You are a marvel.

Yeah Tony! Inspiring week as always. Happy to read the leg is feeling better, and that you have an address too. Keep on.

You have an uncanny knack for causing many people to want to follow your lifestyle. Thanks for helping us live out our dreams, Anton.

Do you think you'll be running on 12/1 for the NFC in Marin? I live about an hour away and trying to determine if I want to come out and check the event out.

Just a thought, Anton: have you considered heading to the UK for some fell races? Seems they've got something going on every weekend there, year round. Would satisfy your longing for competition, steep hills, but without the potential injuries that seem to result from longer distances.

I see you're sporting the new race vest! I'll be picking one up soon.

Pain in the ass I know, but care to recommend (again) a good pair of cold winter running gloves?

Superbe!!!!
Nice!
A question Anton: What is the model of your stud?
It s good to follow you!

Wonderful, enjoying your foto's and videos and your experiences. Thank you Tony

Would satisfy your longing for competition, steep hills, but without the potential injuries that seem to result from longer distances. Cheap NIKE NFL Jerseys

Secret photography refers to the use of an image or video recording device to photograph or film a person who is unaware that they are being intentionally photographed or filmed.
It is sometimes called covert photography, a term used mostly among professional investigators, or unauthorized photography.