2/12/2013
Tue-AM: 1:40, 3000' ~ Green Mt.
Biked to Chat and met Jurker, Rickey, and his friend Bryce for a run up Bear Canyon and then down the front of the mountain. Apprehensive about the longer distance on my hip but Rickey needed the relative flat of the Mesa trail to loosen up his achilles at the start.
PM: Climbing with Joe at Animal World, Boulder Canyon after acupuncture at mid-day.

2/16/2013
Sat-AM: 1:13, 2700' ~ Green Mt.
Biked to Chat and went up Gregory-Ranger and down the front. My first time running up the backside in a really long time, but it was good to start working on that uphill running rhythm again.

2/17/2013
Sun-AM: 1:11, 2700' ~ Green Mt.
Biked to Chat and went up and down the front. Tired this morning.
PM: 1500', Climbing in Eldo Canyon with Buzz.
Really fun afternoon. When I got to Buzz's he asked if I'd brought my rope---inexplicably, I hadn't, I just assumed he would have one.  Well, it turns out all of Buzz's ropes are totally non-standard (short, skinny, static) so we ended up taking his only lead rope, which was only 30m long because he normally uses it for simul-climbing.  In the end, this led to a little more adventurous afternoon in the canyon. When we got to the base of Rewritten/Zot on the Redgarden wall there was (understandably) a line to get on the route, so Buzz instead carefully led up the West Chimney (directly to the right of Rewritten). I took the next pitch up to the Red Ledge and then we traversed over and simul-climbed Swanson's Arete to the top of the Lumpe Tower, which was a total blast. Definitely solo-able material.

In classic Buzz fashion, getting down was a touch trickier. Our short rope made the standard rappels impossible and we both wanted to avoid downclimbing all the way down the East Slabs as we hoped to get in another route before the sun set.  This led to Buzz belaying me as I led a wildly-exposed but reasonably juggy down-traverse pitch before belaying Buzz past the difficulties.

After the quick 4th Class descent back down the west side of the ridge we found Rewritten to be open and I convinced Buzz that we had plenty of time to get up it before running out of light.  I led the first run-out pitch, but was forced to belay Buzz up the crux a little short of the usual ledge because of our short rope. From there we simul-climbed up to the 4th pitch where I then led the uber-classic hand-traverse and finger crack before we simulclimbed the last two pitches to the summit. Ended up getting back to the base of the climb just as the sun was setting in perfect timing.

2/18/2013
Mon-AM: 1:14, 2800' ~ 2nd & 1st Flatirons
Biked to Chat and ran up to the base of the First. The bottom 30-40' were covered in ice and snow, including my usual entrance onto the rock. Above there, things looked good. I spent a lot of time looking for an alternate way onto the rock and even started up on a small lie-back feature slightly farther north on the base before backing down as I wasn't willing to commit to the slabby section above it that would connect me into my usual line.  Ran over and scrambled the 2nd Flatiron as a consolation, even though there was still some snow and ice in the gulley leading to the climb onto the Pullman Car.  On the run down from the summit of the 2nd you go right by the base of the 1st and when I got there I decided, screw it, I'm gonna give it another go. Funny how much easier some rock moves feel once you're warmed up and in the flow. The lie-back and the slab went with zero issue but above there I had to improvise a few other moves because of snow and ice still lingering on some cracks/ledges. There was a BD stopper stuck in the perfect finger-lock hold underneath the Ear chimney move, so I resolved to come back the next day with a nut tool to retrieve the booty.

2/19/2013
Tue-AM: 1:20, 3000' ~ 1st Flatiron+Green Mt.
Ran to the base, scrambled in 16min, downclimbed in 3min, and then continued on to the summit of Green. Strategically brought a nut tool with me and was able to get the stopper from under the Ear. Acupuncture in the afternoon.

2/20/2013
Wed-AM: 1:20, 3000' ~ 1st Flatiron+Green Mt.
Was able to sneak in just under 15min on the scramble today and then on the way down descended Greenman to Gregory (kind of the longest way down the mountain), just to get a little extra running in. Cold morning, could tell it was going to snow, so I was psyched to get in one last ascent of the First for a while. Hip has been feeling quite good.

Injuries are a funny thing.  I've run every day for over two weeks now, but I still don't have 100% confidence in my hip. But it's never really hurt, either. I'm hoping that with continued vigilance, diligence with my exercises, and acupuncture, I'll gradually get there.

These last few days of snow in Colorado have seen me using some new tactics for getting up the hill, notably a pair of trekking poles and some of Kahtoola's new K10 crampons. We haven't had much snow all winter, so this might seem like overkill, but when the footing is deep, unstable, and loose the combination of these two things definitely makes the uphill a lot more efficient.  When I first saw the K10's I wasn't convinced of their utility.  They only have 3/4" teeth (compared to the full inch on Kahtoola's KTS Steel model), but now I see that they're a much more durable (made from a steel alloy) but only slightly heavier alternative to Kahtoola's aluminum crampon.  And the buckling system is very clean and simple.  Who knows how much more snow we'll get down here in Boulder this season (I stick to the KTS Steel with the 1" teeth for the high country), but I've been enjoying the K10's extra bite this past week when Microspikes have been pretty ineffective. 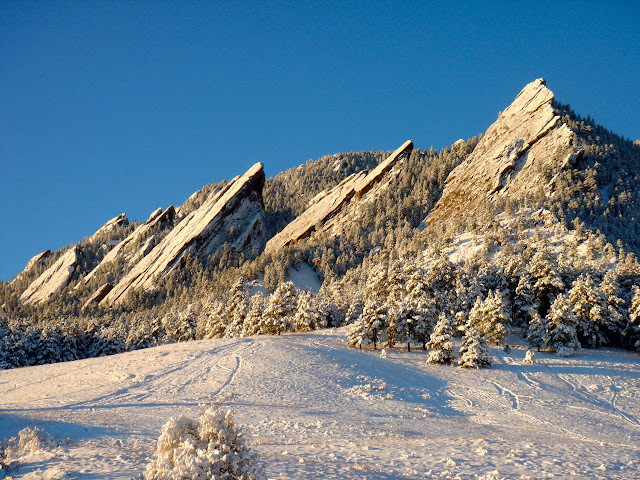 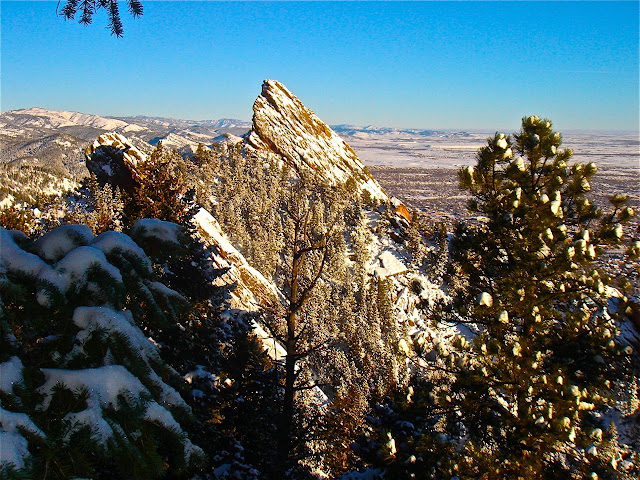 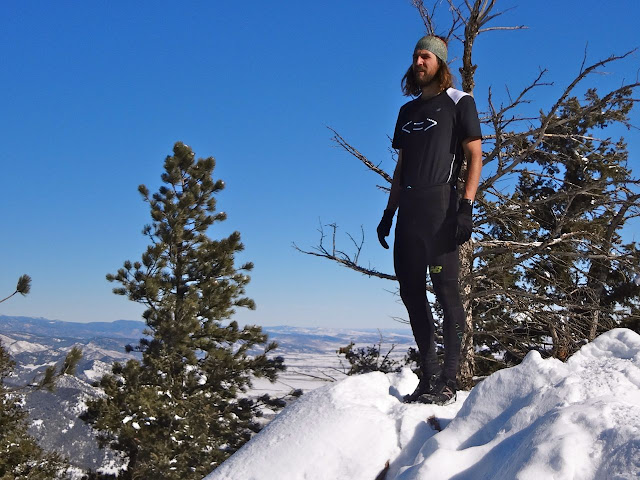 Nice new crampons, saw your tracks today and reminded me that I have not used my kts steels I got last year. Might need them tomorrow after that skier jacked up the trail today...

I'm sure you get suggestions on injury issues all the time and that must get pretty tiresome when you are already experienced at handling them yourself and are receiving professional advice but....... I've followed your recent articles and posts about your hip problem and I've just come back from a very similar injury and my experience of stuff that really helped was as follows. Figured this could be helpful to others to try if not for you:

- Between appointments the daily use a tennis ball or similar to work out trigger points and tight spots in glutes, hip flexors and abductors (especially piriformis, Glute medius / minimus and TFL). This helps to stop the tight spots from creeping back in between acupuncture appointments and speeds up rehab

- Once the worst of the tightness is gone, regular strengthening work such as clamshells etc (see book ref below for more details)

- Standing on one leg with eyes closed for 30 secs at a time regularly every day to get your nervous system / muscles working together properly again (strength is nothing without control etc). Moving to unstable surfaces when this becomes easy. This sounds silly but it's awesome

Can't take credit for this formula myself, it mostly comes from Jay Dicharry's recent book which is an absolute must read for runners IMHO

I ran royal arches during the Sunday snow storm and had a blast! Man, I don't know what it is about running while the snow falls, but it's my absolute favorite.

When you say "up the front" of Green Mt, does that mean always taking Saddle Rock to Greenman? Or Gregory Canyon to Greenman? Both?

Andrew - thanks for the suggestions. Been doing all of that except the tennis ball.

Hi from France !
Do you know if there's a way to get those nice Minimus "Less-Is-More" T-shirts. I'm running in NB Minimus, but it could be cool to get the matching Tees !!
Hope you get well ASAP.
See you at UTMB !

In your opinion, which flat iron do you feel is the more approachable to a newbie who is just starting out say...myself, who has never scrambled up any of the five but would like to start?

Dallas Green - By far, the 2nd Flatiron offers the most mellow terrain for getting comfortable with exposed, slabby scrambling. Most of it is really just high-4th Class with a few 5.easy moves here and there. To actually get to the summit requires some tricky 5.6 moves, but you can easily escape to the trail to the north without summiting.

Having said that, I've seen plenty of roped up parties on the 2nd Flatiron, too, so it all depends on your skill level. Have fun and be safe.

KURSI MAKAN
article from a very amazing, Good Job, Thank you for presenting a wide variety of information that is very interesting to see in this artikle

very amazing, Good Job, Thank you for presenting a wide variety of information that is very interesting to see in this artikle

very amazing post, I like It, Thank you for presenting a wide variety of information that is very interesting to see in this artikle, good job adnd succes For you