Sometimes you must wait. I had planned on doing this run on the Colorado Trail on Saturday, but when I awoke the day was cloudy and dark even though the sun should've already been making it's daily arc across the sky. Low clouds, heavy with moisture, scooted past the surrounding peaks. I anticipated thunderstorms and lightning, which is never a fun thing above tree-line, so instead opted for a comparatively tame thirty miles on the Leadville 100 course around Turquoise Lake and up and over Sugarloaf Pass. Shortly after my run it began raining and didn't stop until the sun went down. I had made a good decision.

Sunday morning started in much the same way, however. When I awoke to rain tapping lightly on The Roost's roof I merely grunted and rolled over, taking refuge beneath a thick layer of goose-down. Thirty minutes later, I gave up sleeping and resorted to reading; waiting, waiting for the rain to stop. Of course, it eventually did.

The Colorado Trail between Camp Hale and Copper Mountain Resort has two 12,000' high points, Kokomo and Searle Passes. I eyed this section of trail on the map mostly because it promised a substantial amount of time above tree-line and because of its proximity to Leadville. Plus, a double-crossing of a mountain range between two highways (Highways 24 and 91) sounded neat.

I made quick work of the 2700' climb to 12,022' Kokomo Pass. Whenever I am on the Colorado Trail my mind inevitably wanders to the prospect of running the entire length in one go. My friends Hal and Ian had run a then-record effort of nine days or so back in 2003, and I tried to imagine what it must've been like to toil up a pass such as this with so many miles behind you and so many more lying ahead. Daunting, I would guess. 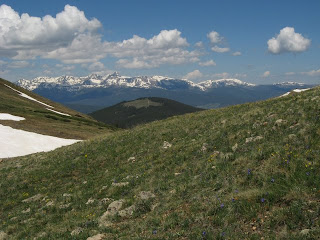 (Looking towards the northern Sawatch, from Kokomo Pass)

At Kokomo, the trail traverses the northeast-facing side of Elk Ridge, contouring at 12,000'. This is where the snow began. Colorado's unseasonably wet and cool spring has delayed melting in the high country, and the portion of the CT between Kokomo and Searle Pass was no exception.

No matter. One of my favorite things about running is its versatile nature, its infinite adaptability. Before mechanized travel and the domestication of beasts the best way to get around quickly was on one's own two feet at a steady, sustainable aerobic pace. Our own soles were the first--and are still the best, in my opinion--all-terrain vehicle.

By sticking to the grassy tundra of the high ridges and peaks in the area--12,000 to 12,600'--I was able to stay clear of any significant snow and enjoy the unfettered freedom of true cross-country running. Additionally, I was afforded the luxury of unparalleled views of Mount of the Holy Cross and the Mosquito and Ten-Mile Ranges.

In high school and college "cross-country" had meant relatively flat and fast anaerobic sufferfests of 5K or 8K in length, typically over an outrageously manicured and watered, golf-course grass surface. Conversely, cross-country running on the alpine tundra of Colorado hews a bit closer to the phrase's literal meaning: I'm standing "here" and I'm going to run across that majestic landscape to "over there" and maybe come back. I much prefer the latter.

As a result of my off-trail exploits, I was granted the view from many lesser summits in the 12,400-12,600' range: Corbett Peak, Sheep Mountain, and North and East Sheep Mountains. Despite the snow, it was still an idyllic day with almost 2hrs of above-treeline time followed by a requisite dip in the Eagle River. And I now know that waiting for this particular section of trail to fully melt out will be worth it.

Such depth in your writing. I simply love it. Looking forward to your book (when you write it).

Great read as usual. By the way, you're not still planning on WS100 this weekend are you? I haven't seen anything about it on your blog in awhile, but your name is still on their entrant list, so I'm just curious.

While its a bummer that you won't be toeing the line with the rest of us in Squaw on Saturday, I think we are benefiting from the extra time you have to put into these posts. It's been very enjoyable reading.