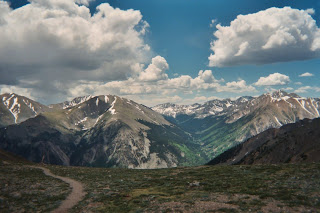 (Looking south from Hope Pass: 14ers Oxford, Belford, and Missouri on the left.)
.
I awoke this morning with an ache in my legs. I burrowed down into my bag, rolled onto my right side in a semi-fetal position, and fully extended my legs. Grooooaaan, that feels nice, but still that same ache. Due to all my injuries over the past year, I haven't had the pleasure of that type of early morning sensation in my legs for quite some time. It is a feeling that is only brought on by lots and lots of running.
The running I did over the weekend was planned to give me a sense for where I am fitness-wise on the Leadville 100 course. This is ground that I've run quite extensively, and often while in the best shape of my life, so it offers a useful barometer for ascertaining where I am and what I need to work on.
Saturday's run covered the first 40 miles of the course: starting in Leadville at the corner of 6th and Harrison, down the Boulevard, around Turquoise Lake, up and over Sugarloaf, through the dreaded road section, and then finally finishing with nine rolling miles of buttery singletrack into Twin Lakes. It's a fast 40 miles of running to be sure, with only about 3000' of vertical spread over two semi-significant climbs.
Prior to this past weekend I hadn't run over four hours since a double-crossing of the Grand Canyon way back in November, so I didn't have a lot of confidence in going this far. Nevertheless, in the past, I've been a bit slow and maybe too relaxed on the run down to Mayqueen during the race, so on Saturday I decided to experiment a bit with a marginally faster initial pace.
A run like this assumes a very specific, goal-oriented nature. If this particular route weren't that of a race, I would never run it. It's simply too uninteresting, and quite frankly, includes too much road (especially when there's a perfectly good singletrack trail that would get you to the same place; alas, it resides in the Mt. Massive Wilderness Area, where organized races aren't typically allowed) and not enough hills. Yet, I have goals, and am willing and curious enough to occassionally sacrifice a little aesthetic appeal and running pleasure to satisfy such priorities.
The day went well with me covering the Leadville to Twin Lakes portion of the LT100 in 5:06. I may have been running off a little angst about not running in California that morning (nothing but complete respect and admiration for my buddy Hal, however). Life became difficult in the expected spots (long, monotonous sections of smooth road), but I was reminded of quite possibly the number one rule of ultrarunning: it doesn't always keep getting worse. One hundred mile runs, and even a forty mile run, are so long that the body tends to go through multiple peaks and valleys of energy and metabolism. The mind's will ebbs and flows. One's legs can ache irritatingly and seemingly without reason, and then be completely rejuvenated by sometimes the most confounding of stimuli (a precipitously steep uphill? a handful of salt? what kind of world is this that I live in?).
But this is (part of) the beauty of the endeavor. If I simply persevere, it is likely that something satisfying will occur. That "thing" may only be a mere finish of the ordeal--the run, the race, the climb--but when that run or race continues for hours upon hours upon miles, or that climb extends for thousands of vertical feet, merely finishing takes on a much greater depth of meaning.
Of course, for some of us, we like to operate with the hubris that "just finishing" is no longer such a big deal and that "finishing this thing as fast as possible" is a worthy objective. Maybe it is, maybe it isn't. I do know that striving to "finish as fast as possible" takes me much, much closer to flirting with that fringe-laden edge where life can either quite quickly go to shit or propel you into an indescribably satisfying blaze of achievement, personal transcendence.
And so Saturday went. I scooted surprisingly effortlessly down the final hill into Twin Lakes, a hill I had not run for two years--not since my participation in the 2007 Leadville Trail 100--punched my watch at the aid station garage, sat down in the shade, peeled my filthy shoes off, and reveled in the glow of a distance well run. For sure, I could not have run another 60 miles at a similar intensity, but it was a satisfying confidence-builder nonetheless.
Sunday's run was essentially the antithesis of Saturday's. Hope Pass is at once terrifying and inspiring. It sits there at the mid-point of the Leadville 100, waiting to be scaled not once but twice, precisely when things are just typically starting to get a little bit above-average tough--due to the accreted mileage--anyways. So, running that pass twice is a good thing to rehearse. Additonally, it is gorgeous. The 12,600' pass enjoys grand views of numerous 14,000' peaks and boasts extremely well-constructed--but still steep--trail nearly the entire way.
On Sunday, I was happy to be running with tired legs. Saturday's forty miler would give Sunday's Hope Double-Crossing a more authentic tinge of tightness, soreness, and fatigue as to what could be expected in the actual event. The first 3400' climb went well. Maybe better than it has ever gone before. My diligent scaling of the area's 14ers seemed to have been paying off and I trotted up and over the alpine summit with unexpected ease. 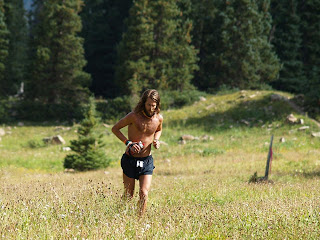 (Coming into the ~12k' meadow on the north side of Hope; LT100 '07)
.
The descent down the other side never ceases to shock me. Every year, my first run down the south side of Hope Pass almost always disheartens me. The bottom half is steep. It pounds the shit out of my quads. And the entire time you know that you just have to turn around--after visiting Winfield--and grunt back up the thing.
Which, of course, is exactly what I did. However, somewhere in the pounding descent, a gel--100 calories of life-giving sugar--managed to shake itself loose from my shorts pocket, leaving me to fend for myself among the rocks and roots and leaves. What, oh what, was I going to do without my sugar? Bonk, that's what. I started the second, 2800' (in 2.5 miles) climb with optimism: the first climb had gone well, why shouldn't this one? I thought for sure my snail's pace ascent would allow me to re-locate my errant Tri-Berry Gu foil packet amongst it's exceedingly more organic surroundings and I would just get the opportunity to slurp it down anyways. Finally, I knew I should complete the climb before three hours of running was up--my usual longest gel-less run length.
Some marmot must've happened upon a tasty breakfast. I did not spot the gel, and I suffered. Which is not necessarily a bad thing. But it did bring into stark relief the absurdity that ultrarunning can bring out in life. How can a packet of Gu become so important? The trickle of a spring? The relief of some shade? I was happily skittering giddily along that fringed edge.
Ultimately, the final climb of the day did not suffer too badly. I climbed as quickly as I ever have during a double crossing and the descent down the gentler northern side was enjoyed. The shallowness of one's energy reserves are not as easily exploited when gravity is on your team and not the opposing's.
Afterwards, in the positively raging Lake Creek, I sat, braced against the snowmelt rush. The hot, high-altitude sun on my upper body could not stave off the goose-bumps brought on by the swirling water. Chafing under my arms smarted. From whence my fitness has come I am still not sure.
at 9:25 PM

Are you a poet drafting your poems on the canvas of extreme endurance?

By the way, you were missed this weekend in Squaw Valley. I enjoyed watching the front runners all day but kept wondering how much cooler (not temperature wise although that might have been nice) it would be if you were there. As you've stated before, it will be there next year.

you were definitely missed at WS100.

I feel compelled to say, Tony, don't overdo it again. I understand your minimalist attitude, but maybe carry an extra 32 grams of gel just in case you need it. Sorry to sound like your mother. Run well.

Thanks for sharing. Great read.

I'll be out in Leadville this weekend, hope to run into you.

Nice, Tony. Glad to hear you are feeling strong again. I have thought that the first 40 on Saturday and then nailing Hope on Sunday would be an awesome training weekend in prep for the race. Did you stay in Twin Lakes or have someone meet you there Saturday night? Just curious about the logistics of it.

Though I will not be running again this year (stupid injuries) I am excited to see you at Leadville. I was WAY behind you in '07 (you passed me going the other way about a mile and a half up the north side Hope). Perhaps as a spectator this year, I'll get to see more of you.

I have goals, and am willing and curious enough to occassionally sacrifice a little aesthetic appeal and running pleasure to satisfy such priorities.

Zero-ing in on this quote. Interesting on several fronts. Less aesthetically pleasing to you, but probably would be a cornucopia of sensory pleasure for most. But I get it ... runs on certain routes to achieve an end in the future rather than in the moment ... both wonderful and tragic at the same time.

I might be trolling up towards Mosquito Pass this weekend, Decalibron ... from the Fairplay side. Drop me a note if interested in potentially connecting.

I think I am starting to read your reports more for your writing style and less for the actual miles.

Colorado is certainly the perfect backdrop for your passion.

After following the WS100 this past weekend I have decided that trail running will be my next step.

Thanks for the inspiration!

A friend has been after me to explore your entries. Now I know why. I'd answer the question posed by SD100 with an "Absolutely".

Thank you for giving the awareness/reminder to your readers that what we bring to endurance running is all of us - body, mind and soul.

The read and the running report are in a dead (Gel free) heat for first place! enjoyed!

Tony - It seems as if you are running much more smarter than in previous years, despite your gel-less double crossing of HOPE. I was at Leadville running (well Hiking) up HOPE in 2006 and 2007, as you and Kyle Skaggs seemed to be effortlessly gliding down, making your way to Twin Lakes. Sure hope everything comes together for you this August and you decide to take on Leadville once again. Good luck healing up! A flatlander from Indiana!!!!!!!!!