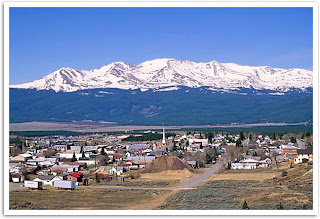 (14,421' Mt. Massive watching over the town of Leadville)
This morning, on my jaunt down to Turquoise Lake, I noticed that the leaves on the aspen trees lining The Boulevard have only just reached a stage that could be considered anything beyond merely "budding". It is mid-June. Down on the Front Range, or in my home state of Nebraska, temps have typically moved on to the consistent 90F range by now, and the fact that it feels like summer is generally without dispute. Not in Leadville, at 10,152'.

(Mt. Massive as seen from the shores of Turquoise Lake)

It rained here briefly yesterday evening, as I was snugly burrowed into my sleeping bag, nose in a book (David Foster Wallace's mammoth opus, Infinite Jest), dry, courtesy of the fiberglass shell a foot above my head. I thought nothing of the quick (but shockingly violent, as most high mountain weather cells are) shower, but as I strided comfortably shirtless down my narrow dirt path this morning I was mildly surprised to see a fresh dusting of snow above tree-line on the Sawatch and Mosquito Ranges, shimmering in the morning sun.

The gently undulating profile and soft, decomposed pine needle padding of the trail on the shores of Turquoise Lake provided my legs with a welcome respite from the more rugged surfaces and arduous grades that I've pursued this week.
. 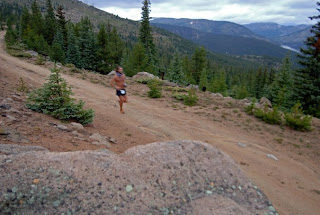 (Sugarloaf Pass, 11,200': mile 20, LT100 '06)
On Mount Princeton, Bald Eagle Mountain (reached by ascending the Leadville 100's famed Powerlines climb to Sugarloaf Pass), and Prospect Mountain earlier in the week I'd begun the process of acclimating my legs and chest to the rigors of running extended up- and downhills without the aid of more standard amounts of barometric pressure to force the oxygen into my lungs.
. 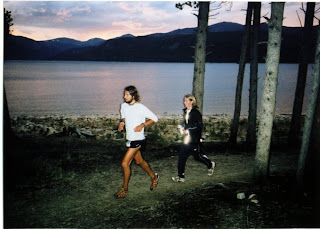 I remember a camping trip that my family took to the Canadian Rockies in 1995, my first summer of running. Doing loops around the campgrounds in the evenings, I couldn't figure out why I was never able to achieve the same feelings of relaxation and comfort that I could while running at home in Nebraska. It wasn't until later that I learned of the effects of altitude on aerobic performance. Nevertheless, it was trips like that--hiking to alpine, glacial lakes, sitting around campfires at night--that unconsciously provided the impetus for me to permanently gravitate towards the higher elevations as an adult.

Of all the towns that I've been to, in my mind Leadville's geography is only rivaled by Silverton or Ouray in it's ability to provide inspiration and instant access to the contiguous U.S.'s highest mountains. And I would argue that Leadville has the single best 360 degree skyline with the towering Sawatch Range to the west, the Continental Divide wrapping around to the north, and the 13-14,000' ridge of the Mosquito Range directly to the east. Leadville sits so high, and the peaks of the two highest mountains in Colorado--Elbert and Massive--are so imposing, that it's easy to forget that the bump of Mt. Sherman right behind town crests 14,000' as well. I am grateful to be here.

Nice post Tony. You are very fortunate in the US to have access to such a spectacular natural resource in which to run. We here in Australia cannot boast of a single peak over 7,300 feet but what we lack in altitude we make up for in diversity.

Somehow swimming in the ocean and running/hiking/camping in the mountains feeds our spirits in a way that other places cannot. I can't help but wonder whether the lifeforce (for want of a better word) in these places is stronger, not yet having been drained by the taint of mankind.

Good luck with your training.

Coincidentally, I was on Mount Sherman this morning and Mount Princeton last weekend. Pictures here -- had a great view of the Leadville area with Turquoise Lake and Massive and Elbert beyond. Passing all the defunct mines on the eastern approach reminded me of your post on Creede.

Keep blogging, Tony. You're an inspiration.

Sherman is a great little peak. I want to navigate it into a run with the Decalibron - but that would be a long ass day that high.

Anton, great post and pictures. I will heading out to Leadville in a couple of weeks for the Marathon, which should be interesting coming from the lowlands of OK. I hope that you are around for the race as it would be a pleasure to meet you. Sorry to hear about WS, but get and stay healthy as we are in this for the long haul.

George,
I've thought quite extensively about a Mosquito Range Traverse that starts either with Decalibron or Weston Pass (on the South end) and runs the ridge...pretty much all above 13,000'. Bross, Lincoln, Cameron, Democrat, Tweto, Treasurevault, Mosquito, Evans, Dyer, Sherman, Sheridan, Peerless, Horseshoe, Ptarmigan, Weston...it gets pretty sick. I'll definitely be doing some route-finding runs in the next couple weeks once the snow melts out a little more.

Tony - yeah, I have put in pieces of this, but then I either get off course or get tired or hungry and need to get home. I recall the south end of the Decalibron - below Democrat being sketchy ... not really running ...

Have you seen Wallace's interview on Charlie Rose? It's a doozy. Not to be missed...and available on the web for free.

I started in to Infinite Jest last week myself after watching the interview.

Have you read Jest before? Let me know what you think. That book knocked me on my ass - so good.

Keep it up,
Nathan