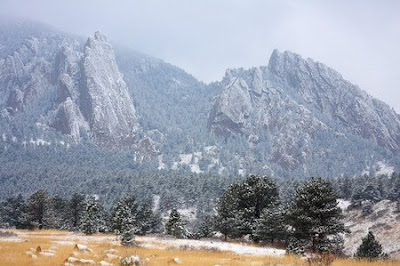 Lying in bed this morning I could already hear the rain falling outside my slightly open window. I have a bit of a head cold, so the sleeping hasn't been the best, and I was awake before my 6:00am alarm. Full tights and rain jacket today. Out the door and into the inky wet darkness. It was cold so I was sure it was snowing up high, which I was looking forward to; give me snow over 32F rain any day.

Yesterday I'd sufficiently taxed the legs with a nice loop that involved summits of both Green Mountain and Bear Peak, so today I was looking for a nice relaxed run with more moderate climbing. When that is the case, I've found myself heading for Flagstaff Road, and that was the goal this morning. The road offers a welcoming predictable surface that would normally induce frustration. However, when the quads are heavy and the hips are tight it is very nice to be able to gain significant altitude by just pitter-pattering along with short, quick steps unhindered by the countless logs and boulders that typify most other routes up Green Mountain.
Jogging up through the neighborhoods on The Hill, I hunkered down beneath my hood, merely tolerating the water hitting me in the face and comforted by the knowledge that it would soon turn to snow. Near the base of Flagstaff it did just that, and I slowly ascended into a different world. I absolutely love mornings like this. At Realization Point, I took my customary turn down and to the left to hook up with the Ranger trail at the stone cottage there. Whereas I'd been running on a gradually more slush-covered, paved surface before, the Ranger singletrack was like stepping into a fairy tale. There are at least three amazing things about snow, when considered in the context of running:
1) Snow is soft. The cushioning effects on downhills and on paved surfaces is immediately noticeable. In great enough depth, it completely smooths out all the rocks and roots on what would normally be an exceedingly technical trail.
2) Snow absorbs sound. Running alone through a snowy mountainscape has to be one of the most singularly silent experiences possible. When everything audible is cancelled out like that, the run inevitably takes on a certain kind of magic.
3) Snow is beautiful. I am a fairly vocal critic of winter, mostly because of snow's mountain trail-drowning qualities. However, any landscape garnished with a fresh inch or two of powder is often breathtaking. I have found the Flatirons to be especially so. (Although, I must say, I am quite partial to either the Garden of the Gods or Red Rocks Canyon in Colorado Springs when it comes to snow-covered vistas.)
This morning, the summit of Green was more symbolic than scenic. The heavy layer of clouds enveloping the mountains precluded seeing more than a few yards into the soupy air, but I reveled in having it all to myself, not seeing another soul out there. I've had the privilege of standing on the summit of Green 16 out of the past 18 days, and each day is different. That may sound cliche, but I believe a mountain summit to be one of those rare entities that works the same way in both a literal and a metaphorical sense. Each time, it offers an invaluable opportunity for perspective.
On the descent back down the Ranger and Flagstaff trails (no paved road descents for me!) my crushed out New Balance 152s road flats offered surprising purchase on the just-right moisture content snow, and as soon as I stepped onto the Creek Path at Eben G. Fine Park the flakes disappeared, but the feeling still remained of having gotten away with something special.
at 10:23 AM

Thanks for sharing. Peace.

I just read Born to Run (It was great). You weren't mentioned much, but I was pleased to find "naked man" among the pages. You rock!

Gotta love the morning runs in the dark. I do it every day with my little black dog. Love your post and enjoy seeing you in Ultrarunning magazine!

My family and I hiked those trails many times growing up and the first few snow falls of the year are always special in Boulder.

Of course, these late October flurries also ruined many a Halloween costume when Mom would demand I wear my green winter down jacket over same. Looking back, I should have just gone (dressed) as a grenade.

Heading over to Chrissy Fields in San Francisco tomorrow to cheer on some friends participating in the 24-hour run. I'm assuming I can leave the down jecket at home.

Trail Runner and it's community benefits from your affinity for the peaks, the solitude, and the run.
Ditto on Al Glenn's comments.
DR

As always, a good read. Thanks for sharing.

Thank you. Your descriptions of running are so refreshing. I can't put it into words, but your way with the rush of it all helps keep me properly focused. I especially enjoyed your description of snow/powder running. Ithaca is the same quiet--almost thunderous for the soul and mind.