Of Running and Biogeochemical Cycling 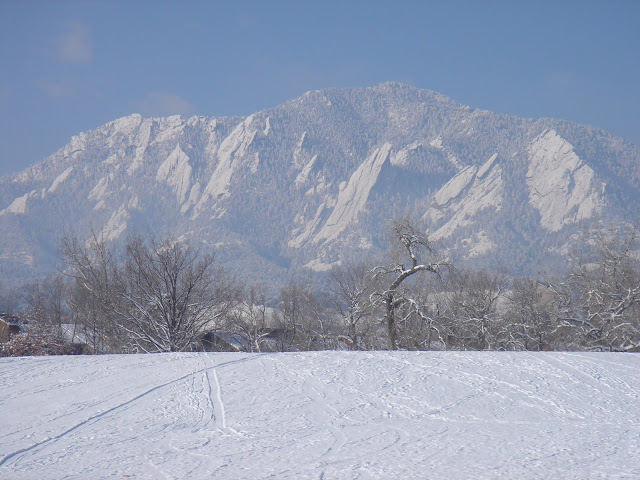 (The frosty visage of my muse, from my apartment.)
Early Wednesday afternoon I snuck out the door in between extensive sessions of reading peer-reviewed environmental research.  I was earnestly attempting, but only marginally succeeding, to assimilate the methods and findings presented in Regulation of the nitrogen biogeochemistry of mountain lakes by subsidies of terrestrial dissolved organic matter and the implications for climate studies (Bunting et al., 2010).  Right.  Clearly, it was time to re-immerse myself in a medium in which I feel a little more adept, even proficient: the snowy slopes of Green Mountain.

After the day's second summit helped get my head straight, though, it was back to the books for more feelings of significantly befuddled inadequacy, courtesy of Nanus et al. 2008 (Evaluating regional patterns in nitrate sources to watersheds in National Parks of the Rocky Mountains using nitrate isotopes).  However, during subsequent episodes on the trails I can't have helped but draw some parallels between alpine environment nutrient cycling and certain behaviors in my running.

One of the more important concepts to consider when studying the carbon (C) and nitrogen (N) cycles--particularly in light of an objectively changing climate and increasing mean global temperatures--is that of feedback loops.  Some feedback loops are negative and some are positive.  When a feedback is negative, the system tends to equilibrate itself and become stable, which is most often the case.  However, when a biogeochemical process operates as a positive feedback, the system responds by magnifying the amplitude of a given input or perturbation and can quickly result in a runaway situation, i.e. the amplitude of the system increases exponentially.

As a result, this decided instability means any scientist is usually quite interested in identifying any positive feedback loops in a given system.  One such example of a hypothesized positive feedback is that of a loop involving atmospheric carbon dioxide (CO2),  CO2 sequestered in permafrost, and increasing global temperatures.  The thinking goes: warmer annual temperatures melt permafrost at high latitudes, which releases CO2 into the atmosphere from the now unfrozen organic material, which new atmospheric CO2 then contributes to further increasing temperatures, and so on and so forth.

(As an aside, over the past months I have been summarily impressed with the apparent level-headedness that seems to prevail at many of Boulder/CU's prominent scientific institutions---the Institute for Arctic and Alpine Research, the National Snow and Ice Data Center, NCAR, NOAA etc---with regards to the typically hot-button issue of climate change.  I have heard a certain director, on more than one occasion, opine that they think Al Gore does more to hurt climate change science than to help it because he habitually overstates and hyperbolizes the case.  Climate Research Unit (CRU) hacking incident and resulting scandal aside, I am very confident in the fact that there are lots and lots of dedicated climate scientists doing unbiased and extremely ethical work.)

Over the last few weeks, it seems as if my running has been under the influence of a similar positive feedback loop.  It feels as if the consistent, reasonable workload of not having missed a day of running no less than two hours (let alone a Green Mt. summit) for the past two months has gradually helped to steel my body against injury.  The longer I can go without injury and maintain such a routine, the stronger my body's various relevant musculoskeletal structures become, which means I can continue to be consistent, which means my body gets stronger, which means strength and fitness improves and chance for injury decreases, and on and on.  The metaphorical snowball rolling down a hill.

However, I am not so sure that this is necessarily a true positive feedback situation where the amplitude of the output will necessarily progress in a runaway fashion.  That is, by very gradually increasing my mileage and ultimately limiting it to a level that is less than maximal, I feel as if I've been able to reap the benefits of a positive feedback loop while enforcing the stability of a negative feedback system. 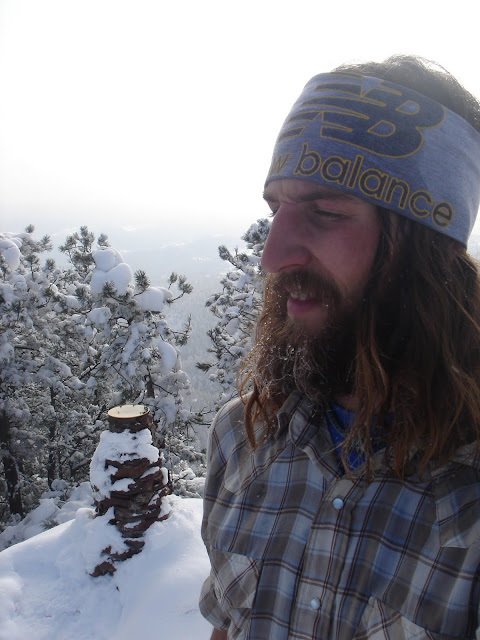 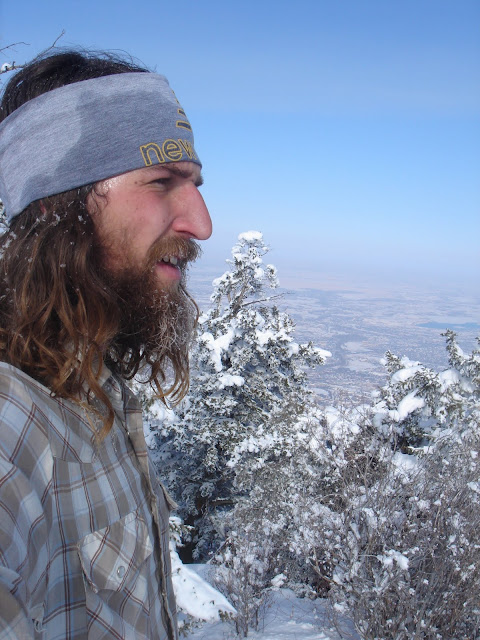 (Summits #63 and #64 this morning.  It was gloriously bright.)
That, and acupuncture appears to not be a ruse, after all.  This morning I set out to challenge my knee with a test that a month (and four acupuncture sessions from Allison Suddard) ago it failed: two consecutive laps on Green Mountain.  The 2-3" of freshly fallen snow on the trails slowed my progress up Green's steep front side more than I would've liked (inefficient 37min ascents rather than the sprightly 35s I'd envisioned on a tacky, packed trail), but the most important fact was that I had zero knee pain on neither descents of Gregory Canyon nor on the 25 minutes of pavement I ran on the way back to my apartment to round out the three-hours and 5300'-of-vertical. 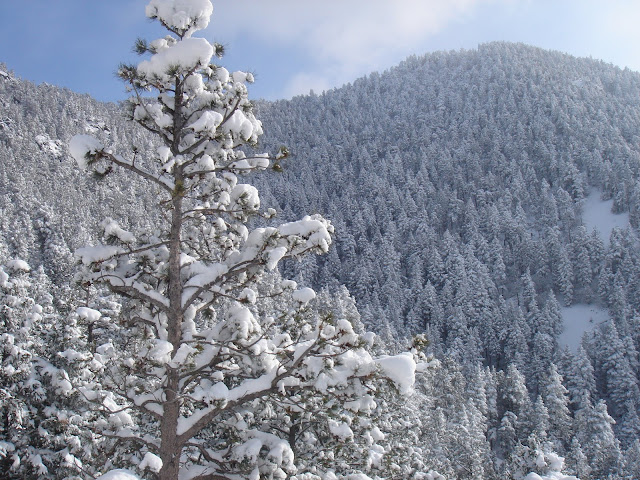 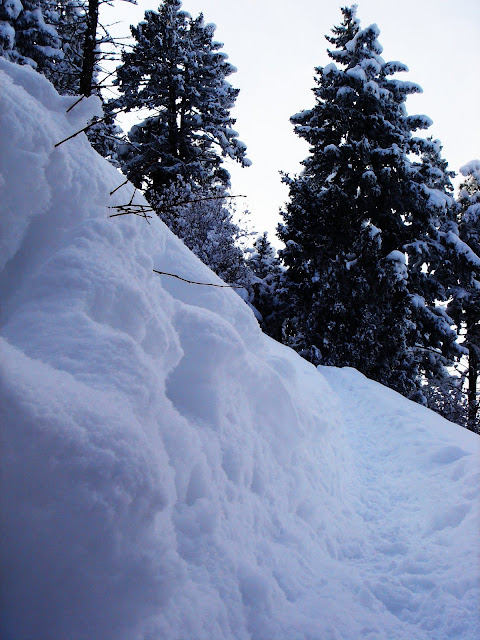 (Lots of snow up there right now...typical trail conditions.)
By continuing to induce a little stability into my regimen, maybe I can be back racing a little sooner than I'd planned.
at 2:19 PM

A camera, again? That's got to be slowing you down. Or maybe you are stashing it up there!

I was going to raise my hand last night at BTR and ask Jeremy why he can't fix you...but JV reminded me you did 143 miles last week.

In your opinion, what is the quickest way to increase global warming? I'd like to be running Pikes in shorts and no shirt next winter.

Brandon,
Jeremy has done a lot to fix me. Like JV said...143 miles has to indicate a certain level of health.

JT,
Quit whining. Or go back to TX. I hear the globe is pretty warm there.

Uuuuhhhh....what??? Sorry, you lost me right away! Did you say something about running in this post?

Pretty interesting stuff! A little different to what I am used to reading from you. In your opinion what is the most "scenic" route up Green Mt? I want to get up there one of this days.

Psyched to hear you are running pain-free and that your streak is alive. Do you drop all the way back down to Chautauqua for the doubles or back to Mesa via Bear?

marco,
"most scenic" is in the eye of the beholder, but gregory canyon to the ranger trail is the "easiest" and the open canyon and then ridge line offer lots of nice views. when you run up Amphi-Saddle Rock-Greenman (the "front" side) you're in the trees a bit more but there are still great views.

stubert,
doing laps on green i usually head up the front of green and then down ranger/gregory, so the "bottom" is the gregory canyon parking lot, maybe 100' or so higher than chautauqua.

Um, I was under the impression that there would be no math -or- learning involved.

I lived at the foot of NCAR for 13 years and I can't tell you how glad I am that you secured a camera to help document your daily journey.

Also - Good to hear that your recovery is going well.

Tony,
Is it still your intent to facilitate the decline of the industrial revolution? I am curious as to how one goes about pursuing such an endeavor. Moreover, how does an individual utilize products and ingenuity from something one wishes to destroy without being hypocritical. Thanks.

Are you still downing that African stew regularly? Would be curious to know whether you have a typical recovery meal/food after finishing a Green Mtn run. I'm a believer that what we use for recovery fuel influences our injury rate more than we might think.

I enjoy reading your blogs. They inspire me to keep adding to my mileage each week! I'm planning on first hundred miler in either April or June. After 2 years of serious running, I feel as though a hundred miler is within my grasp. I've found that upping my mileage in the last month has actually made me stronger!

Given this last post is part Scientific Paper and part running blog might i point out the word "feel" in the statement below::


"I feel as if I've been able to reap the benefits of a positive feedback loop while enforcing the stability of a negative feedback system."

The word feel seems a bit undefined here.. and needs to be replaced with something a big more solid.. and defined..


Good luck on getting back to racing but i do hear that it is a great way to get injured..

I looked into moving back. Then I heard the Hill Country Trail Runners (Austin) had to cancel last weeks trail runs because of snow! I think an ice age is coming!

It is amazing who quick bio-systems break down when pulled out of the normal stress environment. Take the stress of gravity off the body and all kinds of things go wrong. And normal is a sliding scale. I can't believe the Hockey players in the Olympics. They can play a game a day and some are older than 35.
Nice pictures. Thanks.

Hey Tony - love your blog. You write as well as you run. As for this post, I think a case can be made that positive feedback loops don't exist in nature at all. The notion that a system can "run away" exponentially is hard to imagine. The backstop is always some variation on diminishing returns.

As for the climate change thing, I was recently turned onto this series, which gave me a lot of pause. It's called "The Deniers" and it profiles 27 very reputable scientists who discuss their concerns about the debate as it was unfolding a couple of years ago. Given your openness to alternative views on this issue, I think you'll like it.