February was an excellent month.  The second week was a bit shaky with only 88 miles and nothing but the minimum obligatory single summit of Green every day.  My knee was acting up a bit, but strangely it never really hurt when I was running, only while doing the mundane activities of daily life: walking up and down stairs, riding my bike to class or the grocery store, etc.  So, I kept it conservative that week and it paid off very well as the last two weeks have been excellent both in their consistent vertical and volume and in the general happiness of the knee.

I spent most of February getting once-a-week one-hr acupuncture sessions with Allison Suddard, as referred by Jeremy Rodgers.  This was the first time that I've ever had any sort of acupuncture treatment (what Jeremy would refer to as "dry-needling vascularization" and Allison would call "trigger point therapy"), so I was curious as to what a treatment session would involve and whether or not it would have any positive effect on my knee.

After the first session, my right leg was incredibly sore.  Like, I was limping out of the office.  I'd always seen pictures of acupuncture where there were several needles poking out of someone's body and I would think to myself, How can that not hurt?  Well, I got my answer this first session, in that--at least for the kind of Trigger Point therapy that Allison was performing--it simply hurts a lot.  It's a weird kind of hurt, though, almost like a dull ache or numbness sometimes accompanied by what felt like almost an electrical shock when the muscle would occasionally "twitch" (not pleasant) under Allison's manipulation. 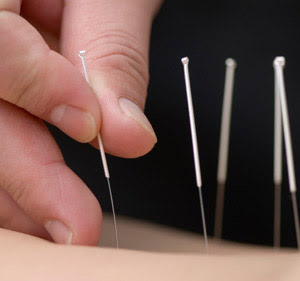 Despite the general discomfort of the treatment, my knee didn't really seem to be getting worse, so I kept going back for all four prescribed sessions even though there didn't really seem to be any improvement in my knee, either.  Mostly, it was just nice to be doing something proactive on a regular basis to improve the condition of the knee.  However, in this last week of February there has definitely been some significant improvement in my knee.  The first that I've seen in these first two months of the year.  So, I'm fairly convinced the acupuncture did something worthwhile, especially since Jeremy had said that the effects (if there would be any) would take a number of weeks to show up.

I am very happy to have continued this month with the consistency that I was able to achieve in January. It seems like I've reached a level of sustainable running that is building strength but isn't precariously riding the line that separates fitness and injury.  I'm not training at my maximum amount, which is something I would too often do (basically, whenever possible) in the past.  Right now, my goal races are still two and four months away, so I need to be able to maintain this sort of volume and intensity for that much longer.

Despite the consistency of the past two months, I haven't raced even once since Leadville last August.  As a result, in looking ahead to March, I hope that my knee continues to improve and that it allows me to complete a couple of intermediate races and/or adventure runs.  A trail 50K or a double-crossing of the Grand Canyon over Spring Break would be very exciting for me.  We shall see.

And now, for this week's selection of auditory pleasure.  The Cold War Kids have so many excellent songs from previous albums, but this is off their very recently released EP Behave Yourself, so I thought it most relevant and appropriate:

I've tried all kinds of different therapies (a-puncture, chiropractic ART, etc..) and my current massage therapist's deep tissue routine seems to be the only one that can consistently keep me healthy. I think it's just one of those things where you have to test out a lot of different options until you find the one that works for you. I hope the knee keeps improving. I want to see you win some races this year.

Good to see you on the trail - thanks for stopping to chat!

Intrigued by your acupuncture...am struggling with what sounds like some similar knee issues myself and have had some treatments too.

Good to hear it's going well for you.

sorry...just got my answer by following her link.

Have you looked at your bike? Did the knee problem correlate with the bike at all? I used to commute by bike and got a strange knee injury. I couldn't figure it out until I stopped biking.
The funny thing was, it wasn't like I was riding hard or going that far.
Just a thought.

Jeff made a good point about the bike. The adaptation your body makes to the physical stresses of mountain running can easily be overturned by another set of forces like those that come with turning the cranks. A cyclist can suffer from knee soreness or even an injury resulting from a seat that is set millimeters too high or low.
It is great to see you training consisently again. Keep firing off those pictures of Green for us dreamy flatlanders!

I love the consistency of your blogging as well as with your running. It is a great inspiration when i wake up to know that in a couple of hours you will be running that mountain. All of a sudden a short lap around the neightbourhood seems dooable and enjoyable even when it pours down. Good health! Good speed! Good life!

I don't even pretend to understand what it takes to complete and Ultra but with what you're doing now, wouldn't an event like the AR50 be "easy" for you to dominate?

Having said this, as a past winner of the event (and considering the beautiful backdrop you've been enjoying), do you even have the desire to travel to compete in something like this?

Oh, and yes I know you've been dealing with injury so I guess this is just me analyzing what you're doing and wondering if you contemplate how your running today will translate to future races.

At any rate, great stuff.

I went up Green this morning (Amphitheater, Saddle, Greenman), and trail conditions are just about perfect for a FKT attempt for the round trip - continuous coverage of nicely packed sticky snow. How fast do you think you could do the round trip from Gregory? sub 50?
Alex

Admittedly I don't run anywhere near as far as you, although I do run almost entirely trails/hills.

I've always fixed knee discomfort with 1) rolling my leg on a foam roller to loosen muscles (esp. IT band and calves) and 2) direct pressure massage on the knee, especially moving the kneecap aside to get at the tissues behind. My assumption being that all tracking/stress issues arise from the muscles not being elastic enough. I can't say enough about massage as maintenance.

This is the type of roller I'm thinking of: http://tinyurl.com/6uqfmt, I've seen them at stores in Boulder such as Boulder Running Company.

You probably already use this, but just in case...

I love the consistency of your blogging as well as with your running. It is a great inspiration when i wake up to know that in a couple of hours you will be running that mountain.
Wish you enjoy your corlorful life