09-20-2011
Tue-AM: 1:20, 2500'
Green Mt. up and down Amp-Gman. Snappy 35:15 ascent and THREE bear sightings!  The first was a small black bear on lower Greenman who promptly went crashing into the underbrush.  The second and third were when I was coming down on Saddle Rock below the spring and just above the first rock outcropping.  They were hanging out in the drainage to the west and both were quite large, one black and the other tinted more with brown.  They seemed only mildly anxious and eventually ambled off into the woods up towards the Saddle Rock itself.
PM: 1:33, 2500'
Green Mt. up and down Amp-Gman. 34:30PR hike up and I somehow managed to see two more bears, which brings my seasonal tally to nine!  The first was just after the Bluebell-Baird trail junction, right as the trail drops down to connect with the start of Amphitheater.  A big black bear was right on the trail and went crashing down into the Gregory Creek drainage to the north.  The second was drinking from the spring on Saddle Rock trail, right in the middle of the trail.  Another big black bear.  I wonder whether that was the same big black bear I saw in that general area this morning.  My 6:30pm start meant that the hike down was almost entirely in the dark and quite slow going as a result.

09-22-2011
Thu-AM: 2:22, 2700'
Eldorado Mt. via Rattlesnake Gulch and NW Ridge.  Really slow-going in places but got lots of practice on boulder fields. Most notably, I actually ran the last 26min back down to town with only minor protest from my post-tib/soleus. Definitely progress. All the rest was hiking, of course, which was especially frustrating on the way up the initial shallow grades.

09-23-2011
Fri-AM: 2:30, 2100'
2xFlattie3. Met Buzz and Peter at Chat and went up the super-classic East Face of the Third. After making the 200ft mostly free rappel directly off the backside the ropes wouldn't pull, so Peter and I cruised a much, much quicker second ascent (:26 vs. almost an hour for the first lap) and instead descended the two-pitch rappel down the SW side. Fantastic morning with only one other party on the rock (on the first pitch of the second lap).
PM: 1:14, 2500'
Green Mt. up and down Amp-Gman. 33:20 PR climb, felt great. Got caught by darkness on Saddle Rock on the way down, but not nearly as bad as on Tuesday.

This was a great week with lots of quality time in the mountains, but some lower-leg tendonitis is still preventing me from enjoying much of that time in the form of running.  Nevertheless, I seem to actually be getting into decent-ish shape as evidenced by reasonably quick hiking ascents of Green.  I was particularly pleased to get in my first 14er of the year this evening. On one hand, it is semi-depressing/disappointing that it's taken me this long to get up a real mountain this year, but on the other--after breaking my leg this summer--I have to just remind myself how grateful and happy I am to be getting out in the mountains at all right now! I put in a good effort on La Plata and I'd be interested to know how that ascent stacks up against someone fit who is trying to run every step.

Saturday and Sunday I was doing a bit of filming (well, talking and running for me) for this forth-coming documentary, and the trip up to Aspen and the Maroon Bells was well worth the drive.  I usually make it up there at some point every year during peak foliage, but for some reason the beauty of the Bells was particularly striking today. 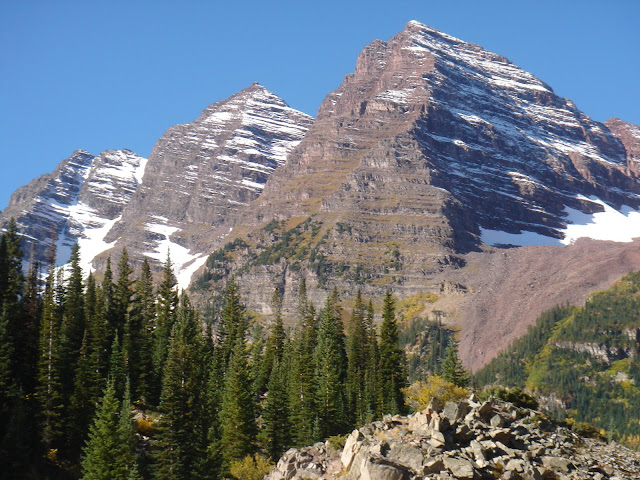 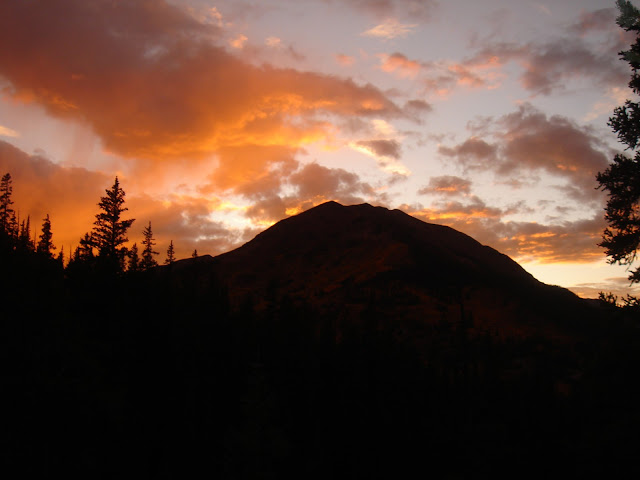 What exactly do you do when you meet bears?

Tony, your La Plata "hiking" ascent is solid. FWIW, I went up in 1:26 last July and down in 56. I ran what I could and hiked a fair bit. It was a solid effort (at least on the upper half of the mountain), but not entirely committed, as I was with the dog and spent some time checking up on a friend who was hiking the mountain the same day.

Allison hiked Green last night and saw 4 bears. I saw 1 (and heard 1 or 2 more, probably a mom with cubs) last Thursday, only 10 feet away. Not sure what is up with the increased activity. In all my years running in OSMP, I have not seen one until 2 weeks ago.

Caren - stare for a bit, then walk away (they usually scamper away first).

Jeff - Yeah, on steep terrain at altitude (especially techy stuff) it's hard to run much faster than a strong hike it seems. I need to go hike Elbert and compare since I have lots of running ascents on that peak. On LP last night I ran maybe the first 8-9min where the trail is very flat/rolling through the forest but once it started climbing I immediately switched into a hike. Also, there is maybe a 3-4min flat section at ~11k' (right before you hit the first boulder field) that I ran on the way up. Everything else was a hike. I've summited LP two other times, but both were years ago and it seems there has been a ton of quality trail work done on that route. Very nice trail.

Hiking a 14er (or any trail where the grade is ~1000'/mile or greater) is totally fun on the uphill, but the frustrating part for me right now (and this goes for Green/Bear, too) is the downhill--walking downhill is lame and frustrating. I probably ran a bit too much of the downhill last night, though, as the shin was a bit tighter than normal this morning.

Awesome pics Tony. Keep on truckin' and getting better.

Quick question: if you were healthy - would you have participated in UROC?

Looks boring and uneventful. You must have been anxious to get to lower elevations and run on the pavement. Sorry it was such a down week.
*note the heavy, heavy sarcasm.

Tony,
Caught any good shows lately? I was blessed to have attended a Walkmen/Fleet Foxes/Bon Iver show a few days back and it was totally worth the $35 bucks. You would have approved. Good to see you are progressing. Take care man.

Love your blog and not sure what I'd do without it, I really enjoy reading it and looking at your awesome pics of your local scenery. I'm also in total awe of your running ability.

I did notice one small thing about your blog: your main header image is 1.4MB which is probably slowly down the loading of your website for some people.

Here's an optimised version of your header image which is 10% of the size and with almost the same quality: http://www.philipsmithson.com/wp-content/uploads/2011/09/hope_up.jpg
Feel free to download it and use it to replace the current image.

Thanks Tony and keep up the good work!

Elbrus Race is a race about running the highest mountain in Europe. all the best

Maybe You should start run very easy on flat courses. I think walking is useful and climbing is fun with beatiful scenerys in nature but if you want to train running you have to run! Muscular function is totally different in running than walking. Also impacts for one´s mind who loves running so much are totally different during running. All the best and remember maybe short slow runs are better than long walks...

Congrats on La Plata! That's my favorite in Sawatch Range. Did you wear MT110 on LP and Flatirons? What are your best times on Elbert and Massive? I wish I were in Sawatch checking the new trail on Yale.

Totally off topic, but I've been wondering, what, if anything do you do for strength training?

You are seeing Bears like I see moose. We call moose rats here in SLC, they are everywhere. I see a few daily.

Logan - I saw Broken Social Scene open for TV On The Radio in Denver last week. Maybe the overall best show of my life.

Phil - thanks for the tip; I made the change.

Pasi - I definitely realize there's a difference btwn running and hiking, but "slow running" right now isn't even an option. Believe me, if I could do it pain-free I would be! But just ask Scott J--I'm not messing around when I'm hiking on this steep terrain; I'm going faster than most people can even "run" it.

Jerry - 110s are my go-to shoe for everything right now. Except soloing the Flatirons! I still like the sticky rubber and security of my Sportiva Mythos rock shoes for that. I'm no Buzz Burrell, scrambling in Exum Ridges or Fireblades! I hit Elbert and Massive a lot when I was living in Leadville. My best time on Elbert was a 1:15 from the North/Half Moon Creek TH. My best time on Massive (from the South/East Half Moon TH--this follows the Colorado Trail for ~3mi) was 1:28 to the summit. I love the Sawatch.

Karl - Yeah, the bears have been crazy this year, but I only ever see moose down in the San Juans...

The primary characteristic I find inspiring upon reading your blog (both periodically, yet sometimes more so) is not only have you maintained integrity with an otherwise "season ending" injury, you continue to seek refuge in the very thing that perhaps attributed to it. That leads one to think; your passion lies much deeper than a superficial "win" of an ultra (not that running Leadville in almost record breaking time is superficial...but you know what I mean). Thanks for staying true!

wow, bss opening for tv on the radio...great gig...
best mixed bill for me was maybe holy f*ck and wolf parade?
or Pearl Jam-Soundgarden at Lollapalooza '92!

Anton, I appreciate Your open answer.
Let the force be with you and I´m sure that with nerve and courage you will be able to run soon.
The god of trails is quiet but demanding.
Some people like me here in Finland read your blog with great pleasure and respect.
Keep going!

Tony,
That must have been a crazy good show. TV puts out some very interesting shows to say the least according to a buddy of mine. My big problem is that nowaday's my musical preferences are becoming more of the norm. I loved knowing that the majority of the bands I would venture to see were going to be in a smaller, more intimate venue which usually equates to a more acoustically pleasing and more personal show. Now though, I find myself in 5000 seat theaters standing, or sitting in some cases, a couple hundred feet from the stage making it hard to enjoy in most cases. I guess I am not as "Indie" as I thought I was.
Furthermore, enjoy the shows now that ya can but I guess we cant be surprised when they start handing out binoculars at the door at the Walkmen or The Innocence Mission shows, right?

Hey Anton, Just read your review of the MT100B, and you said you would do serious trail running in it. What about the MT20OR? or is that still a shoe, you would consider only for light running. Im living in Oklahoma right now so I basically have to hunt for hills and trails.